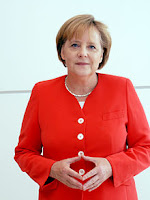 I know this because @IndiaKnight, and others, are gleefully insulting her “camel toe” on Twitter. Now, this could be some of my weird-arse feminist principles coming into play, but Angela Merkel’s vagina or vulva or whatever genitalia is currently being belittled is possibly the least interesting thing about her. [Unless she has a corn on her toe. I don’t actually care about that either.] The important thing here is that she’s the Chancellor of Germany; like the only financially stable country in Europe right now.


The woman has actual fiscal power to help end the recession [not to mention that pesky issue of the more women in power, the more likely issues specific to women are to get government attention]. Merkel is a hell of a lot smarter than The Double Nincompoop Act of Sarkozy and Berlusconi and I thank the Goddess everyday that those two are gone. But, I don’t remember Twitter insulting the various genitalia of those two and, frankly, their sexually predatory behaviour is well-documented.
But, Merkel has a vagina. And, it doesn’t matter what she does or how she does it. All that matters is that, today, Merkel has a “camel toe” and, therefore, is an object of ridicule. My crazy-arse Feminist principles don’t care how Merkel looks. I care what she says and the consequences of her actions. They have the real ability to cause serious harm or fix a serious situation. Her vagina does not. So let’s stop playing the Patriarchal Fuckability Game and start worrying about what Merkel is doing [along with every other European politician] right now.