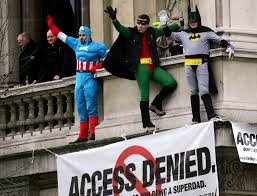 I haven’t written too much about my experience of online abuse with Fathers4Justice last year, mostly because I don’t want a swarm of their buckethead members descending on me. Again. However, the recent violent abuse directed at feminist campaigner Caroline Criado-Perez has made me change my mind on this issue.

My first personal encounter with Fathers4Justice was on Mumsnet. F4J members troll the relationships and feminist board on Mumsnet all the time. They are tedious and completely lacking in self-awareness. They frequently come on threads started by women who are experiencing domestic violence and blame the women for being victims. Members also start threads whining about how they aren’t allowed to contact their children due to the hateful mother. A quick google invariably finds that the man has been denied contact after criminal convictions for violence against the ex-partner and/ or drug and alcohol abuse. Their trolling isn’t restricted to attacking women survivors of domestic violence but also victims of sexual violence and rape. They deliberately misrepresent what is being said on a thread in order to discredit women. It is safe to say I have no respect whatsoever for their organisation.

The incident last year started with F4J announcing a new campaign targeting Marks & Spencer’s because of their advertising on Mumsnet who “promote gender hatred” and labels “men and boys as rapists, paedophiles and wife beaters”. F4J members trolled both Mumsnet’s talk boards and Mumsnet’s Facebook wall making unsubstantiated and libellous statements about Mumsnet. The also attempted to publish the ad below in a variety of newspapers although only the I-Independent actually published the ad in the end.

There were numerous conversations on the Mumsnet talkboards and FB wall between members of Mumsnet and members of F4J. There was rudeness on both sides but Fathers4Justice members went beyond rude and straight to intimidation tactics and threats of violence. They told outright lies about what was written on Mumsnet, took quotes out of context and tried to silence criticism with threats of violence dressed up as ‘concern’. The F4J FB wall was a disgraceful example of male privilege and violence.

In the end, I posted a link to the Advertising Standards Agency’s complaint form on Mumsnet’s wall. I did so because the ad below is clearly in breach of ASA standards. I received hundreds of abusive messages from members of F4J on Mumsnet, Mumsnet’s FB wall and F4J’s FB wall. One member of F4J responded to my post by stating that I deserved to shot in the head.

According to the senior members of F4J posting on the wall, this does not count as an actual threat of violence because the member didn’t say he was going to shoot me in the head. Instead, this man suggested he’d help pay someone to shoot me in the head. But, this isn’t a “violent threat” and I was told I was over-reacting, whining and being a drama queen for demanding that this man remove his post. Mumsnet staffers deleted the whole wall post at my request. They also deleted almost the entirety of my personal posting history on Mumsnet at my request.

I had my posting history deleted because I don’t trust men who think its acceptable to threaten, intimidate and abuse women online. I don’t trust F4J to remove violent men from their organisation and I don’t trust the police to have taken the threat seriously.

A member of F4J threatened to shoot me in the head after a week of harassment and intimidation by other F4J members. Numerous members got in line to congratulate the man who threatened to have me shot. I have never received an apology from the organisation. Nor have they ever taken responsibility for the threats of violence and abuse made in their name against other members of Mumsnet.

My experience with F4J is commonplace. This is the abuse that all women face online. It was my first experience with a potential death threat [and by no means the last, even from F4J members]. In retrospect, I should have screencapped the threat and reported it to the police. But, at that point, it never even occurred to me. I just wanted the threat gone and my posting history deleted for the safety of my children [which MN did despite the fact that deleting a history as huge as mine was time-consuming and difficult!].*

As awful as that weekend was, I was also very lucky. I was surrounded by a thousands of women members of Mumsnet who stood with me. This is true feminist activism: standing up for other women. Being surrounded by women who have your back is a truly powerful and amazing gift.

This is why I am saddened by those attacking Caroline Criado-Perez as “attention-seeking” and insinuating that she’s over-reacting. I had one serious death threat in a 2 day period of intense harassment and intimidation. Caroline has had literally hundreds; not to mention the sheer number of rape threats. We should all have her back, as we should have the back of every single woman threatened by male violence.

The only people responsible for male violence are the men who perpetrate it and those who minimise it.

Criticism is unsisterly and divisive and it does nothing to destroy the patriarchy. It also ignores the perpetrator.

*A huge thank you to smallwhitecat and HelenMN for their personal support that weekend. 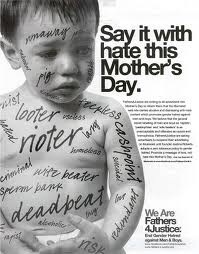 Written by Justine Roberts, CEO of Mumsnet, on Saturday 17 March
Some of you may have noticed that a group called Fathers 4 Justice has been saying some pretty unpleasant things about us over the last couple of weeks. In an ‘advert’ which appeared first on Facebook and then in Friday March 16th’s edition of the I, the group claims Mumsnet “promotes gender hatred”, and labels “men and boys as rapists, paedophiles and wife beaters”. It calls on advertisers to suspend advertising on Mumsnet.
Most people, I’m quite sure, will see the adverts and the ‘campaign’ behind them for precisely what they are: a naked attempt to court publicity by a group of people who, for whatever reason, appear to have tired of climbing cranes in superhero outfits. (And, just coincidentally, in the run-up to Mother’s Day). In fact, it feels a bit like having a particularly irritating toddler repeatedly prodding you with a stick to get some attention.
By and large, it seemed most sensible to ignore them, not least because we’ve had our hands quite full with stuff that actually matters, like Mumsnet’s We Believe You campaign to dispel rape myths.
But since Fathers 4 Justice appear to have attracted some grown-ups’ attention, we thought we should tell you a bit about the background to this attack, the truth behind their allegations, and how they are trying to bully us and other organisations.
Here are 10 things you should know…