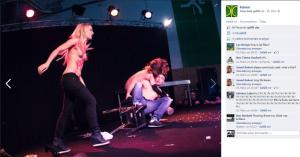 I have been very critical of Femen’s brand of feminist activism. I supported their goals years ago when they were targeting sex traffickers and male violence, although not the methods they employ. Now, Femen seem to be after the media attention rather than supporting women. Femen have moved into colonialist discourse where in white women are the saviours of brown women. The recent protests against the burqha and Islam have been steeped in racism and the othering of women. Whilst I firmly believe that feminism has multiple constructions and that we are all on a journey but at different places on that journey, I find Femen’s activism deeply troubling.

Today, I read a blog at LaLibertineSalon which claims that a Femen activist attacked a woman who works as a stripper on stage. I am really hoping this isn’t true because I can not believe that anyone who labels themselves as a feminist would believe that physically attacking other women was acceptable.

I am an abolitionist. I believe that all parts of the “sex industry” are harmful to women as a political class. I do understand the arguments about the ‘sex industry’ [from Hooters to lap dance clubs to prostitution] being the only industry in which women living in poverty or who are Othered can survive but I believe that is why we need to destroy the Patriarchy. Poverty and lack of choice are not acceptable reasons to commodify women’s bodies.

What the Femen activist did isn’t feminist activism. Feminism is a political theory which attacks  political structures. We are critical of women’s behaviour but that criticism can not descend into personal attacks, both physical and emotional.

Feminism is about sisterhood and solidarity. It is about making the world a better place for all women. We cannot do that whilst engaged in sustained personal attacks.

I am thankful I read the piece at LaLibertineSalon as I had missed this story, however, I am equally disturbed by the personal attacks on Meghan Murphy and Stella Marr at the bottom of the article. The assumption that feminists who campaign against the ‘sex industry’ must be omniscient is harmful. This idea that Murphy and Marr must know every single thing every other feminist on the planet is doing and must write about it is ridiculous.

It is also wrong. Mainstream feminists have written about the harm caused by Femen. Murphy has written several pieces on the subject. I have not seen anything by Marr but that’s because I have not yet read every word she has ever written. I have read numerous pieces by mainstream feminists from Germaine Greer to Sara Salem. I’ve read criticisms in the Guardian, Al Jazeera and the CBC. If the author of LaLibertineSalon has not, well, I’m assuming it is because she isn’t omniscient either.

Feminists cannot and must not let personal attacks on other women go unchallenged, whether that is Femen engaged in deeply troubling behaviour to women sniping at other women about their brand of feminism.

We need to move out of this toxic discourse and start focussing on the real problems.

We need to stop demanding perfection and total obedience from women. None of us are perfect. None of us have all the answers. Pretending that we do is harmful; as is demanding that every woman who self-defines as feminist must agree with everything we say or be booted out.

We are not the Patriarchy so let’s stop acting like it.

One thought on “Femen : This isn’t Feminism”