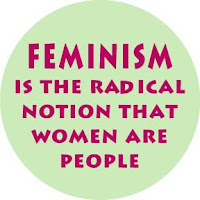 You’d think this was only directed a the arsewipes at a Voice for Men and the rape apologists hanging out at the ironically named Good Men Project but it seems a number of actual self-defining feminists are struggling with this too.

So, here’s the point:

Holding the entire feminist movement accountable for a mistake one feminist made ten years ago is deeply stupid.

Holding all [insert feminist category of choice here] responsible for a mistake one person made six months ago is stupid.

Trashing one feminist for making a mistake once is stupid.

Feminism is a movement and one in which we are all learning.

We will make mistakes. We will change our minds. We will be as imperfect as every other human on the planet.

If all you do is whine about what other women are doing and saying, then you really need to reassess your feminist principles.

We need to call each other out on racism, homophobia, lesbophobia, disblism, classism etc. One mistake should be forgiven as part of a learning process.

A pattern of abusive behaviour should not be forgiven.

So, for all the so-called feminists out there whining about activism of The Women’s Room UK and Caroline Criado Perez, stop being so freaking self-centred and try supporting your sisters instead of wasting all your time trashing them.

And, the trashing goes for middle class white journalism too. We should all have access to education and decent employment. Let’s campaign for that instead of whining about some women being more privileged than others.

The endgoal of feminism is to liberate all women, not reduce us to the lowest common denominator. Frankly, that’s just offensive.