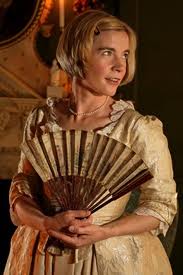 Apparently, there were only 3 categories of “girls” in the 17th century. God only knows what they did with women but “girls” got to be either a harlot, housewife or heroine. Probably, they could have had more options if they got to be women but, the BBC is pretty sure they were all “girls”. I would have gritted my teeth, ignored the sexism and just watched the program but the first time I came across it was an advertisement featuring a woman’s breasts. That she was powdering. Seriously.

Who comes up with this twaddle? And, who, seriously, is the intended audience of this program? Because the historian in me is pretty pissed about this. Harlots, Houswives and Heroines is supposed to be an historical program examining the role of women in Restoration England. Yet, it’s being advertised with breasts; not a woman’s body. Just a woman’s breasts. Do we really need to advertise academic programs with soft-porn? Using women’s breasts to flog a show whose audience base will be women with an interest in women’s history and not soft-porn is stupid; regardless of what Hugh Hefner thinks. Does the BBC genuinely think its audience is incapable of watching a program about women without focussing on their breasts?

This is the official BBC write-up:

In this new three-part series historian and Chief Curator of Historic Royal Palaces Dr Lucy Worsley immerses herself in the world of Restoration England, exploring the captivating lives of the women of the period.

The years after the Civil War and the Restoration of Charles II marked the end of the medieval era and the beginning of the modern age. These were exciting times for women, some of whom displayed remarkably modern attitudes and ambitions, achieving wealth, celebrity and power in ways that still look outstanding by 21st century standards. But these women also faced a world that was predominantly male, misogynistic and medieval in its outlook.

In the first episode Lucy investigates the lives of women at the top: the King’s mistresses at the Royal Court. When Charles and his entourage returned from exile they came back with a host of continental ideas, and as a result some of the women at court rose to prominence as never before, gaining unprecedented political influence and independence.

Amongst a fascinating cast of female characters, the most astonishing were Charles II’s own mistresses: the Royalist, Barbara Villiers, the French spy Louise de Keroualle and the infamous Cockney actress, Nell Gwynn.

Lucy examines the lives of these women, discovering how their fortunes were shaped by the Restoration and how their stories reflect the atmosphere of these extraordinary years. As she discovers, these women were key Restoration players, but as mistresses were truly in charge of their own destinies – or simply part of the world’s oldest profession?

Where the frig do we start with this? Because it made me #facepalm. Ignoring the teleology and the idea that we somehow live in a non-misogynistic society now which is, erm, somewhat goofy. It may have been “exciting times” for some rich women but the Restoration of Charles II didn’t lead to exciting changes in the lives of most women who remained, for the most part, illiterate and poor with no real legal rights. Using the case studies of a few women, whose lives were simply not within the norms of the period, doesn’t make it “exciting for women”. Hell, it doesn’t even make it exciting for those substrata of wealthy women who managed to carve, for themselves, newish forms of power. And, let’s be crystal clear about this, using your body and sexuality isn’t a new “power” for women. Manipulating sexuality is frequently the only way women can carve themselves a safe space. Being a mistress didn’t make one powerful; nor, really, did being a wife. Mistresses, as with wives, were still dependent on the goodwill of the Patriarchy to survive. They could quite easily be dismissed and destroyed. Indeed, many were.

And, FFS, can we stop with this “the world’s oldest profession” bullshit. Prostitution is a violent, degrading act forced on women’s bodies because of the structural inequalities within the capitalist-patriarchy. It is not a “profession”. It is the abuse of women and children who have no other option. It is about poverty and constructing women’s bodies as less-human. The women in this documentary may have wielded power in a structurally constrained way but they did not hold “power”. That remained with men.

I am still going to watch the program, what with the whole being a history nerd thing. I’m just going to be cross whilst doing so. There will, no doubt, be angry tweeting tonight.