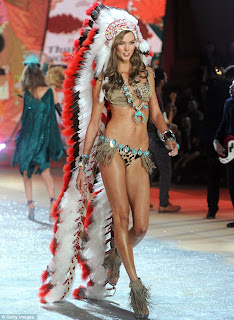 We have this somewhat ridiculous article by Kamila Kocialkowska on whether or not the cultural appropriation of the Plains Indian War Bonnet is offensive. Now, I fully planned on blogging about this last night after reading the article but the thought of, once again, having to point out that it doesn’t matter if white Dudes think it’s okay to run around pretending to be ‘Indians’, it’s still rude. White Dudes have a habit of thinking all sorts of things are okay despite them being obviously racist, homophobic, disablist or misogynistic. As a general rule of thumb, if white Dudes think something is socially acceptable, it’s probably best to take 2 minutes to double-check. Just in case.

I decided to have a bubble bath instead. I know this isn’t a very helpful response to this level of nincompoopery but this will be something like the fourth time I’ve written about cultural appropriation in the past two weeks and I’m starting to bore myself.

Here’s the thing, I think the cultural appropriation of the Plains Indian War Bonnet by Lana Del Ray, No Doubt and Victoria’s Secret is incredibly rude, offensive and totally lacking in critical thinking skills. Frankly, this total refusal to listen to the opinions of other people sets my teeth on edge. That’s why we have a Tory party. If you don’t belong to them and you are spouting the “it’s P.C gone mad” line, you might want to rethink your political position. Or, acknowledge that you’re an asshole. Or, both. Probably both.

Pretty much the entirety of Kocialkowska’s article pissed me off with it’s total refusal to engage with the opinions of others but I found this section particularly telling:

The truth is that nowadays, cultural assimilation has become so all-pervasive it’s almost unnoticeable. Popular culture has always consisted of mining, borrowing from and subverting the cultural heritage of the past. In fact, Frederic Jameson went so far as to see this as a defining factor of the postmodern age. For him, the past and its symbols no longer exist, “except as a repository of genres, styles, and codes ready for commodification”.

This has vast implications for political incorrectness – no symbol can truly be said to be culturally isolated any more. The eagle-feathered headdress which inspired such extensive outrage on the Victoria’s Secret runway doesn’t belong to the Native American repositry alone. It’s origins date back to widespread early cultures, including Aztec warriors, early Gaelic clan chiefs and Slavic hussars. Now it’s been assimilated into contemporary culture and passed into the collective unconscious. Its original meaning is melded and mixed in a sea of new, secular meanings.

In other words, in a postmodern, post-ironic, globalised world, can anyone really be said to have ownership over their own heritage?

First off, Victoria’s Secret were referencing the Plains Indian War Bonnet. They were not referencing Aztec warriors or Gaelic clan chiefs or Slavic hussars. So, let’s not play the “other-people-did-it-so-its-totally-not-special” game as it makes everyone look like a buckethead. Secondly, we all know that things-which-one-sticks-on-one’s-head are frequently used as signifiers of power. That is because it is a simple and visible way to denote power relationships; see: the Victorian top-hat. Minimising or dismissing these signifiers, as Victoria’s Secret did, is rude and is, inherently, racist. Thirdly, even if you were too dim to get this, First Nations, Metis, Inuit and Native Americans have been saying this for years. 30 seconds on google would have been evidence of this. Fourthly, invoking the “John-Wayne-and-Clint-Eastwood-were-in-movies-about-Injuns” argument just makes you look more racist and dim. The fact that they engaged in racist stereotypes does not make using those stereotypes acceptable. It just means there are a whole lot of racist, culturally insensitive, dim people running about the continent.

Finally, we may be living in a world where postmodernism is God but that doesn’t mean that postmodernism is actually God. Or, that most of the people running about claiming to be postmodern have any understanding of postmodernism. The word postmodernism is bandied about a lot by people who think it makes them sound clever when, frequently, it’s the opposite. So, yes, people are entitled to have ownership over their own heritage. There is no grey area over this. Deliberately, or undeliberately, minimising, mocking or otherwise plagiarising the cultural heritage of other people is ignorant, arrogant and rude.

There is no such thing as post-irony either. That’s the same twaddle as people suggesting we live in a post-feminist, post-racism world. It’s just nincompoopery.

Oh, and what  Kocialkowska neglects to mention in her article is that the model in the War Bonnet image was meant to represent the month of November: the month where Americans give thanks for committing mass genocide. Because that wasn’t at all stupid either.

5 thoughts on “In the missing the point entirely category today:”