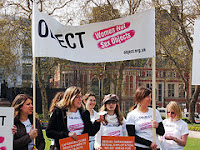 The knowledge that lap dancing clubs lead to an increase in sexual violence is hardly a surprise to anyone whose actually bothered to read any of the research into the links between increased sexual violence and the sex industry. This, however, is the first time I’ve heard a senior police officer discuss lap dancing clubs in such terms. Inspector Ian Drummond-Smith, the police chief in the “resort” of Newquay wrote an official letter objecting to the town council licensing a lap dancing club. Drummond-Smith claimed that the lap dancing clubs had already “contributed” to 14 rapes and 34 other sexual assaults in the area within the last two years. Okay, I’m not entirely comfortable with this bit:

“It is of concern that sexual entertainment would take place in such proximity to dwellings and vulnerable persons, and those leaving the premises, having been subject to highly sexualised performances, may be at greater risk of committing sexual offences. The combination of factors above, in particular the vulnerable groups identified, have contributed to the sex crimes.”

Since, it seems to imply that men who commit sexual offences after participating in the objectification and abuse of women in lap dancing clubs are “vulnerable”; as if men are so controlled by their penises that they can’t help but rape women after hanging out in a lap dancing club. That pisses me off. Women are vulnerable because of the increase in sexual violence. Men are at an increased risk of committing a criminal offence; that does not make them vulnerable.

But, I am pleased to hear a senior police officer making the national press whilst arguing against the provision of lap dancing clubs and I am incredibly grateful to the campaigners at Object who fought to have lap dancing clubs rezoned as “sex entertainment venues” (in England and Wales) so that the general public has an opportunity to campaign against their existence. I hope the Scottish government has the gumption to do the same.