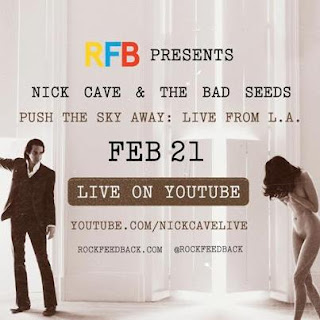 Obviously, the Nick Cave is a better feminists than feminists theory has been around for a while. He was blithering on about it in an interview in New York Mag in 2010. This is the full quote:

You write a lot about sexual neurosis, which has gotten you into some trouble. Do you consider yourself a feminist?

Well, I don’t consider myself not one. I’m not a misogynist, so you can dispense with that. I think I’ve done wonders for the feminist movement. I get criticized for a lot of what I write about, but as far as I’m concerned I’m actually standing up and having a look at what goes on in the minds of men, and I have the authority to talk about it because I’m a man. Women don’t have the authority because they don’t know what goes on in a man’s head, so largely what they say is kind of irrelevant. My songs and stories and books are character-driven, they talk about the way people are and the way men are and women are. I’m actually confronting certain issues that some women appear to feel are now redundant.

Bless his little socks. What we think about what goes on in men’s heads is irrelevant. I’m glad he thinks that because he won’t like what I’m thinking right now. And, I’m sure he understands that I know what he thinks about women is complete twaddle: sexist twaddle at that. I do like the arrogance of Cave’s being able to understand what women “are” when women are too incapable of understanding men.

Yep, nothing inherently problematic or anti-feminist with that piece of nincompoopery at all.
And, now, Cave has an awesome new album cover to prove his feminist credentials. One which does not objectify women’s bodies in any way. After all, it’s totally normal for men to be fully clothed whilst women are naked. And, it’s totally normal for the man to be clearly ordering the woman from the room whilst the woman looks ashamed. Covering her face and breasts while displaying her vulva just looks pretty. Or, something.
Normally, this kind of crap bypasses me. I only came across it via Media through a Feminist Lens. I’ve read a huge chunk of the discussion of this album cover on Nick Cave’s FB wall and all I can say is that is full of dingbats and nincompoops. This, however, is the best ‘how to miss the point completely comment’ by one of his fans on his FB wall:

“How about waiting to listen to the album BEFORE you decide the image is offensive?”

Honestly, I had to read it about six times before I actually got that the quote was as dim as I thought. I had no idea my listening skills were required to analyse an image.

You learn something new everyday.

[I am aware that the image is that of Cave’s wife. I think that makes it creepier personally but it’s the construction of clothed, powerful man and naked, shamed woman which I find so utterly Patriarchal and unpleasant.]

14 thoughts on “Nick Cave is a Better Feminist than Feminists”