The following was sent to me via email by a woman who attended the Nottingham Women’s Conference but who is neither an organiser nor one of the presenters. She is distressed by the obfuscations and outright fabrications about what happened yesterday and she wanted her voice to be heard but was worried about the inevitable attack, as experienced by the conference organisers and a number of other women in the past 36 hours.

I have also added images of the statement tweeted out by the organisers during the event in response to criticism. They are below.

It became clear that there were there women who are sex workers and active on twitter who chose to come to Nottingham Women’s Conference to protest the inclusion of abolitionist groups such as NORMAS. They had been unhappy about the inclusion of abolitionist groups and exited woman and have expressing their displeasure on twitter. In July, NWC offered them places and they declined.
They were open about their intentions to gate crash the conference on social media so it was hardly a surprise when they arrived.  The conference had sold out some weeks ago, and there was a waiting list of women hoping to attend. I know this as I tried to pull strings to get an extra ticket for a friend and was firmly told no!
The organisers took their legal obligations seriously and refused to let anyone in who had not bought a ticket.
The three sex workers were not allowed in for this reason. Not because they are sex workers. If that was the case, then why would local services for women have been given free tickets? Why would there have been sex workers in the audience? That doesn’t make sense.

I am aware that SWOU contacted the organisers and requested a platform. However, this was only a couple of weeks ago and the speakers & workshop leaders had already been booked. There was literally no room for anyone else.

I am also aware that the organisers contacted Whorephobia after a blog post about the exclusion of sex workers some months ago. An invitation was extended and refused.
Personally, I am not actually sure what else could have been done.

The twitter hashtag was over run by those who felt able (despite not being present) to comment, criticise & attack the decisions of the organisers. It actually started to read like a tabloid headline.

“Sex workers locked in car park!” – well the car park was at the entrance to the venue so maybe we were all locked in?

“Sex workers locked out of venue!” – the door was open all day.

There seems to be an assumption made that, because the three women turned up to the event, they should have been let in. Why? Why should they take precedence over other women? What makes their rights greater?

Just because they are Sex workers does not automatically gain them entry and a platform to speak at a sold out event. Especially, given that other sex workers were already in attendance. Does your activism & presence on twitter give you more of a say than other women?
The fact is, they didn’t buy a ticket. They didn’t ask to be involved until it was too late.
They are not the only sex workers in the country.
They are not the only ones who can speak on behalf on sex workers.
They do not have more right than any other women.

Yes, there were exited women present who spoke eloquently & articulately about their experiences.

UPDATE: Currently, I’m being attacked across twitter for the last two sentence of this piece. Honestly, if you think that it implies that sex workers aren’t women too, you’re just desperate to find something to complain. It quite clearly states that the conference wasn’t just about the issue of sex work and exited women. It was a day-long conference on a multitude of topics relevant to women.

And, how on earth can you tell whether or not the above statement was written by an exited woman, a prostituted woman or a sex worker? It is an anonymous statement. Hence, there are no identifying details of the woman who wrote the statement.


Statement by the organisers: 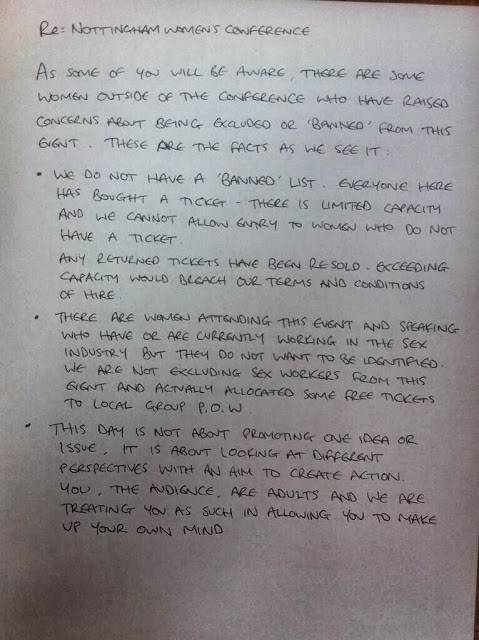 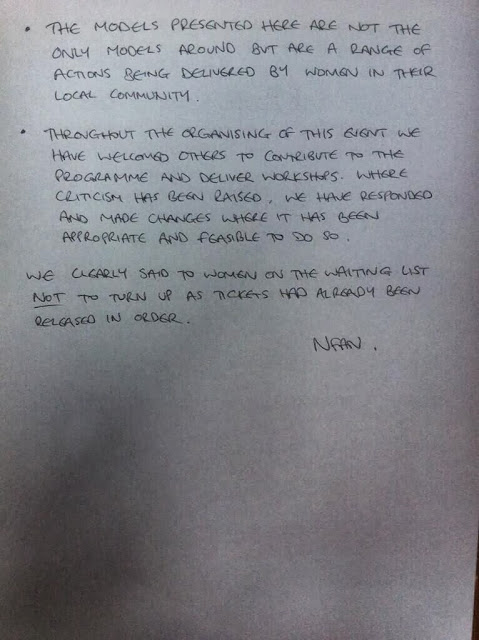 UPDATE: I have deleted the comments on this blog and I will continue deleting them as it is clearly stirring from those who were not at the event.