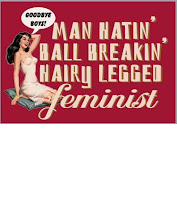 Technically, I’m not a lesbian but I’m a RadFem which, apparently, makes me a man-hating, anti-sex lesbian by default. You know, as opposed to those other feminists who have to go around telling people they aren’t “that kind” of feminist: the lesbians who hate men and wear dungarees.

We need to loose this discourse between bad and good feminists and stop buying into the Patriarchy’s definition of Acceptable Feminism, which is those feminists men still deem fuckable. I’m a feminist because I want nothing less than the liberation of all women from the capitalist-patriarchy. I do not need some middle class white guy telling me whether or not I count as a “good” feminist, even if the rest of his article is actually quite good.

Claiming that your feminism is different from those “man-hating, dungaree wearing lesbian feminists” just reinforces lies about feminism. Feminists need to stop stating stereotypes about other feminists and otherwise you might just be reinforcing a heteronormative construction of feminism which denigrates lesbian feminists.

2 thoughts on “Proud to be a Man-Hating Lesbian: On Patriachal Approved Feminism”