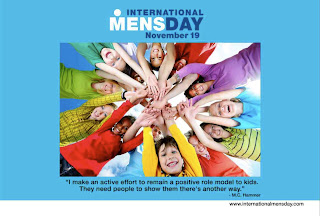 Now, I’m not really a fan of International Men’s Day. They already have 364 days a year which is all about them. Their insistence on whining about “gender equality” requiring men to have a special day as well just shows how little they understand their privilege and women’s oppression. Normally, I ignore it. If International Men’s Day actually focused on the oppression of men within the Patriarchy and dealt with issues like male violence against other men or the high rate of male suicide, I’d be willing to engage more. But, every year, they have a great slogan. Then, you look underneath and find the same old misogyny.

This year’s theme is Positive Male Role Models. Considering the likes of Charlie Sheen, Chris Brown and Ched Evans running about, positive male role models for young boys are absolutely necessary. But, when I read this:

Objectives of International Men’s Day include a focus on men’s and boy’s health, improving gender relations, promoting gender equality, and highlighting positive male role models. It is an occasion for men to celebrate their achievements and contributions, in particular their contributions to community, family, marriage, and child care while highlighting the discrimination against them.

I don’t see a discussion on positive role models. I see drivel; the same kind of drivel espoused by Father’s 4 Justice who are nothing more than a collective of abusive thugs having tantrums. When aren’t men’s achievements and contributions being celebrated? Every time a man changes a nappy, he gets a standing ovation. They have award ceremonies in every industry to celebrate their achievements and contributions. Frankly, I’m awaiting the day when they set up an award ceremony for having the biggest pooh. They already celebrate everything else. And, I’m sorry but what discrimination are they on about? The discrimination against them by other men? Because it isn’t women oppressing and discriminating against men. It’s other men.

When I read this:

The November IMD is a significant date as it interfaces the popular ‘Movember‘ charity event and also with Universal Children’s Day on Nov 20 with which IMD forms a 48 hour celebration of men and children respectively, and of the special relationships they share.

I don’t see men campaigning for a charity for men’s health. I see a smokescreen designed to make themselves feel better by actually doing very little. The co-option of Universal Children’s Day is, frankly, disgraceful. After all, who commits the most violence against children and who are most responsible for the curtailment of children’s basic human rights: men. If the International Men’s Day committee cared about children’s human rights, they’d dedicate the day to eradicating male violence against children. Instead, they are using it as a whitewash of male violence.

But, what really, really pisses me off about these hypocrites is this shit:

The ability to sacrifice your needs on behalf of others is fundamental to manhood, as is honour. Manhood rites of passage the world over recognise the importance of sacrifice in the development of Manhood.
Men make sacrifices everyday in their place of work, in their role as husbands and fathers, for their families, for their friends, for their communities and for their nation. International Men’s Day is an opportunity for people everywhere of goodwill to appreciate and celebrate the men in their lives and the contribution they make to society for the greater good of all.

Anytime, any man starts babbling on about manhood and rights of passage, I want to vomit. These are celebrations of male violence. Plus, the links are to Wikipedia. I may have snorted tea all over the cat laughing when I opened them. Who links to the search page on Wikipedia?

I know a lot of good men who are good fathers and partners and who genuinely care about the problem of male violence, real role models and parenting. Generally, they aren’t the dudes whining about people not taking enough notice of them.
And, if you don’t think this damning enough: check out their sponsors Dads4Kids. These aren’t the good guys. They are just the Patriarchy trying out a new hat.

2 thoughts on “So, it’s International Men’s Day, and, erm, #facepalm”