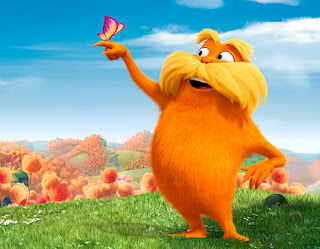 Took Small to see The Lorax this morning. It was actually pretty funny in places and less patronising than Ferngully with the whole destruction of the forest killing the planet story line. Thing is, The Lorax still felt obligated to go with two utterly stupid and dire tropes: the fat, stupid sidekick and the “it’s only okay to hit girls that aren’t pretty”. I know I complained about the trailer to The Lorax previously but it just annoyed me even more in the film. This is what I said about the trailer:

It would be nice if just one film directed at children didn’t include threats of violence and gender stereotyping. Is that really so much to ask? Is Hollywood so lacking in imagination that they can’t imagine a world where people don’t run about threatening to punch anyone who disagrees with them or denigrating those who don’t fit Patriarchal Constructions of Fuckability?

The normalising of male violence is harmful for everyone. It teaches boys that they are nothing but violent thugs incapable of self-control and tells girls they are responsible for the violence because they aren’t pretty enough or nag too much. And, this is without going into the whole basis of the plot which is that boys only do dangerous and stupid things to get the attention of girls. Because, boys are never, ever responsible for their own bad decisions. Always has to be the fault of a woman, [and its worth pointing out that the young boy is being raised by a single mother whilst the man who caused the tree crisis was being raised by an emotionally abusive mother reinforcing the “woman are responsible for male behaviour trope on several levels].

The fat, slow, and dim sidekick in The Lorax was a bear; one who just couldn’t keep up either intellectually or physically. It didn’t anything to the story. It wasn’t funny. It was just the same old pick on the fat kid shit which is everywhere. It was the same demeaning behaviour as evidenced in most Hollywood comedies which are anything but. Being overweight doesn’t make one stupid and it’s unbelievably tedious to see this trope used over and over again. The Lorax could have been a brilliant film; instead in went for crass jokes and offensive stereotypes. Plus ca change and all that.