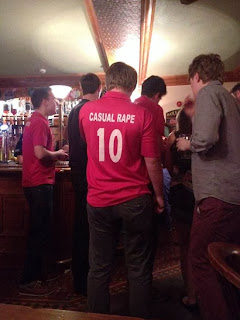 Aberystwyth University’s cricket team has had its funding withdrawn by the student union and has been banned from competing because of this photograph. A disciplinary panel ruled that the team had brought the university into disrepute by breaking the code of conduct.

I want to celebrate this as a moment when a university finally takes a clear stand on rape culture but I have too many little niggles. Firstly, the team has only been banned from taking part in one indoor competition. Withdrawing of funding will hamper their ability to play this year but not as much as banning the club from competing for twelve months would have. Secondly, there are references to other inappropriate slogans on t-shirts but media coverage  doesn’t state what these messages are. I want to know if the other t-shirts involved sexually explicit or abusive language. If more than one player was wearing a t-shirt making “jokes” about sexual violence, then I don’t see how banning for one match will change things.

And, thirdly, this isn’t an example of “sexual harassment” as stated by activities officer Liv Prewett. It’s a real threat. Women and children live with the threat of rape everyday: in our homes, schools, churches, playgrounds and at work. Being in a bar with a man wearing a t-shirt minimising rape just feeds into our worries about sexual violence. This type of t-shirt is what makes it difficult for women to participate in public. It’s a direct threat of violence: maybe this man won’t rape you but one in five women over the age of 16 will be raped. This is our reality.

Young men running about in t-shirts minimising rape are precisely the young men we need to be afraid of; these are the men who don’t believe rape culture exists. These are the men who ignore the reality of violence against women and children and make excuses for rapists. A spokesman for the cricket club may have said: ‘We understand the severity of the situation and steps are being undertaken to ensure no further offence is caused.” but we know they don’t. Wearing this t-shirt isn’t just about one man in a t-shirt, it’s about a whole culture which blames women for being raped.

If Aberystwyth University wants us to believe they are taking rape culture seriously, this young man should be prohibited from playing any sports for the university. The entire team should have been banned for playing for at least one year and this should go on their permanent records.

This is “boys just being boys” because we raising another generation of men to believe they have every right to sexually violate women.
If we want to end rape culture, we need to start taking this type of violence seriously.