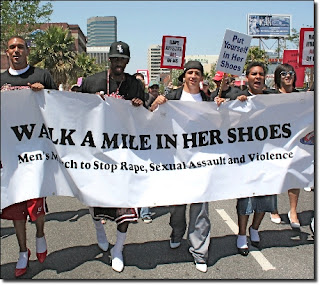 The ‘Walk a Mile in her Shoes‘ images are making the rounds on Facebook. Again. They have always made me twitch. I just don’t see how men walking down a road in high heels will lead to a greater awareness of male violence against women; not when rape culture is getting worse. I’d like to put them with the group of men, like those who support White Ribbon Campaign, who want to help make things better; even if they don’t always get it right. But, there is something about the ‘Walk a Mile in Her Shoes’ campaign that just makes me really, really uncomfortable.

To be completely honest, despite it making me uncomfortable, I haven’t actually thought about what the “Walk a Mile in her Shoes” marches mean or what their origins are. I’ve just assumed they were from something dodgy, but, then, I think most things involving men yakking about violence against women are dodgy [See also: the unrelenting white hero narrative of Half the Sky ]; unless they are doing it as an ally. Allies are good. Patrick Stewart makes a good ally. He supports women’s organisations not by taking over but by using his celebrity to access a public platform to talk about how important those organisations are. Men who co-opt the movement for publicity or to make themself feel cool = bad.

I probably wouldn’t have thought much further on this issue had it not been for this Facebook status update by Virginia Pele yesterday:

Dudes, u wearing high-heels shoes might be some kinda fun, but u know what would make a real change? You and your caste stopping raping womyn ! #walk a mile in her shoes, as if all womyn wore heels. They could at least criticize harmful beauty practices for womyn. Do so-called pro-feminists always have to be that ridiculous ?

My first response was this:

Of course, when we point out the physical damage caused to women’s bodies by wearing heels, we are told we are over-thinking things and to concentrate on something more important. But, men walking up the high street in suits and heels is totally going to end VAW and is massively important. More important than anything a woman could ever do.

Since then, I’ve been trying to articulate what exactly it is that bothers me about this but haven’t been quite able to make sense of it but I think it does boil down to the double standard: women-only Reclaim the Night marches are jeered and insulted despite it being very clearly about victims of sexualised violence reclaiming their bodies and the public space. A bunch of men tottering about in heels is cheered and supported by all. I think it works to further silence women’s voices because it makes it about men; not men stopping violence against women but a mockery* of that. Women’s concerns about male violence and the sheer power of the fashion-beauty complex are being belittled by men; men who probably think they are helping.

Today, I took Virginia’s advice and had a proper nosey about their website. I suggest everyone do so because it is really quite, well, arrogant and self-righteous. Apparently, “sexualised violence does not just affect women.” I think we can all agree with that. Men can, and are, victims of sexualised violence; as are children. But, this isn’t what the “Walk a Mile in Her Shoes” men are talking about: sexualised violence affects men because of their relationships with women:

It affects the men who care about them, their families, their friends, their coworkers, and their communities. Sexualized violence is epidemic. Some of the statistics:** Every two minutes someone in America is raped. One in six American women are victims of sexual assault.That means someone you know, someone you care about, has been or may become the victim of sexual violence. It may be your mother, your sister, your friend, your girlfriend, your wife, your coworker, or your daughter.

So, they are completely ignoring the issue of male rape and focussing on rape being a problem because it might happen to some woman that men might know or, more cynically, think they have the right to possess. This, in and of itself, is really unbelievably patronising and arrogant. It also neglects to mention that the most sexualised violence is committed by men. It is committed by men on the bodies of women, children and other men. You can not have a discussion about sexualised violence without naming the perpetrators. To do so is asinine, counter-productive and, frankly, stupid. “Walk a Mile in Her Shoes” has done precisely that.

As irritating as all that is, the mission statement of “Walk a Mile in Her Shoes” is really the most obviously stupid:

Co-creating a United Gender Movement, men will be a part of the solution to ending sexualized violence.

Walk a Mile in Her Shoes® Events are political and performance art with public, personal and existential messages. At a Walk a Mile in Her Shoes® Event there is no distinction between performer and audience. Our mission is to create a unique and powerful public experience that educates individuals and communities about the causes of sexualized violence, provides them with prevention and remediation strategies and empowers them to further develop and implement these knowledges and skills interpersonally and politically.

Thirdly, sexualised violence is a crime. It is not an opportunity for performance art with “public, personal and existential messages”. WTF does that even mean? Women in Reclaim the Night marches aren’t performers. They are women engaged in political protest. They do not have an “audience” to perform for. Men meandering about in high heels does not educate people about the causes of sexualised violence, particularly when they are too chicken to name the perpetrators. And, I can’t even begin to work out how they think a bunch of men in Louboutins are learning “prevention and remediation strategies [that] empowers them to further develop and implement these knowledges and skills interpersonally and politically”.
Honestly, who buys into this twaddle? Every page on their website has a huge donate here button which probably wouldn’t have set off my trolldar if “Walk a Mile in Her Shoes” weren’t now part of Venture Humanity Inc. Venture Humanity only has one another subsidiary: Now House Therapy Centre which runs classes in Postmodern therapies.
I genuinely don’t even know where to start with “postmodern therapies”. I really don’t; except to say that following the money is always a good idea. Not that I have the skills to look out their finances but I find the connection between the “performance art” of Walk a Mile in Her Shoes and the “postmodern therapies” of Now House Therapy Centre deeply suspect.
But, then, I’m always cynical about men trying to fix things without actually naming the thing they are trying to fix; just like with Half the Sky.

**This embedded link was included in the quote.