I must have been having a naive moment when I opened the link to 13 of the Worst Mothers Living On This Planet (clean link). Or, had taken one too many cold pills this morning since I assumed it would be a list of mothers who have killed their children. I wanted to write a comparison of how the media covers child murders committed by mothers versus those committed fathers. It’s not. It’s actually a list of “worst mothers” ever where most are blamed for the behaviour of a man or denigrated for having a mental illness.

Just in case any MRE asshats rock up, I have googled “worst fathers living on the planet”. This is the top five hits on google: 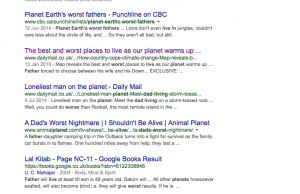 3 hits refer to animals, 1 refers to a really bad vacation and the last refers to a climate change (I shit you not). Worst fathers on the planet are animals that eat their young – worst mothers are Kris Jenner who signed her kids up to a reality television show.

Now, I’ve never actually watched the Kardashians – or any of its spin-offs – and I’m not a fan of any parent who signs their children up to reality TV. I don’t think parents have the moral right to put their children in the public sphere in a way which is guaranteed to result in them experiencing abuse and harassment. If it is true that Jenner was responsible for releasing the video of her daughter having sex without consent, then she has committed sexual assault. I would absolutely agree that this makes her a bad mother but until I have actual evidence that Jenner did this I’m going to approach any such claims with a grain of salt. After all, the rest of the “13 of the worst mothers living on the planet” list aren’t exactly serial killers, child rapists or violent offenders.

Linda Hogan, Kate Gosselin, Nene Leakes, and Dana Lohan are also on the list because they were involved in reality tv shows. Also, involved in those shows: the fathers – who don’t appear to be on any “shit father” list. Because, hypocrisy.

Also on the list for hypocrisy: Brooke Mueller, Courtney Love, and Kate Moss. How many male celebrities are fathers who have a history of drug use? How many of those fathers are considered “the worst fathers living on the planet”?

Jenner’s daughter Kourtney Kardashian makes it on the list “because of the terrible antics of one of Kourtney’s lovers, Scott Disick”. I had to google Disick having never heard of him but it turns out he’s Kardashian’s long-term partner and father of her three children. There are also rumours that he is an alcoholic and all-around jerk, but I only found those rumours looking at Perez Hilton’s website and Hilton isn’t exactly renown for his attachment to reality. So, we have Kourtney Kardashian as one of the “13 worst mothers living on the planet’ because her partner is a dick. Because that is the definition of a shit mother: reproducing with a jerk. Although, clearly not the definition of a shit father because that is reserved for lions who eat their babies.

I had to google Farrah Abraham and Jenelle Evans both of whom made it on the list because of difficulties they faced following motherhood at age 16 which was broadcast on MTV. Britney Spears makes it on the list for similar reasons: unable to deal with ‘fame’ (read: unrelenting shit from a celebrity obsessed culture which prefers to destroy young women rather than celebrate their accomplishments) and because she is bipolar. All 3 of these women were raised in difficult circumstances – Spears was the main breadwinner for her family and her father still maintains control of her estate effectively infantilising her for life whilst Evans is living with domestic violence. These women are the “worst mothers living on the planet”  not because of what they have done (although all have interacted with the criminal justice system at some point) but because they have not managed to remain Paragons whilst being chased by paparazzi, labelled fat daily, and surrounded by predators interested only in how much money they can squeeze out of them.

Nadya Suleman makes the list for giving birth to octuplets through IVF despite having 3 children already and not being able to financially care for them all. Not a word is made of the fertility specialist who implanted 8 embryos in her womb or the fact that the US lacks both the healthcare and welfare structures to support its own citizens preferring instead to spend billions killing other children around the world. There are issues raised by this case – notably the ethics of the medical profession but they don’t make Suleman “the worst mother living on the planet”.

The only mother on this list who actually deserves to be on it is the Mom from Futurama. And, she’s a fucking cartoon character.

In the interests of gender parity, I’ve come up with my list of “worst fathers living on the planet”.

In no particular order:

Charlie Sheen: for multiple accounts of domestic violence and years of substance abuse. After all, if it makes Mueller a bad mother, then it certainly makes Sheen a bad father – and that’s without the small issue of Sheen actually shooting a former girlfriend in the arm.

Andrew Parsons: Call me persnickety, but a man who kills the mother of his child in front of the child is  not a “good father” like the judge claimed.

Every single father who perpetrates domestic and/or sexual violence and abuse.