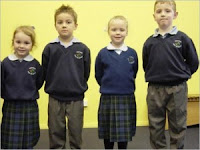 It doesn’t matter if you stick a bunch of preschoolers in ties or teenagers in bright orange prison jumpsuits, dressing children the same doesn’t make them better learners. It doesn’t make them behave better. Children learn best in safe environments where they are respected and where the staff and management respect one another. I know I’ve ranted about this before [and all over MN] but I have NEVER seen any research-based evidence that says uniform increases student outcomes or changes their behaviour positively. I have seen lots of studies which imply this [and media coverage which swears blind that this is the case] but in these studies the inclusion or formalising of school uniforms has always been part of a wide-ranging number of changes to the schools including a new management team and a new behavioural contract policy.

This article in the BBC just made me want to rip my hair out. Now, I don’t necessarily agree that teenagers calling their teachers by their first names is a good thing. That’s the type of behaviour that comes after positive relationships already exist between the students and staff [and I frigging loathe the diminutive “Miss” for women teachers. Totally demeaning that shit is]. But, this pretence that British children learn better wearing ties and shorts in the winter is just nincompoopery. American, Canadian and German children don’t wear uniforms and their children aren’t running about like Barbarians blowing up schools and assassinating their teachers. Violence does occur but that is reflected, particularly in the US, in the exclusion of poor, ethnic minority students into sinkhole schools and gang culture. It’s about poverty and racism. Children aren’t stupid. They can tell when their school is funded properly or when they are being dumped somewhere with teachers who don’t care and they respond accordingly.

Could we just stop with this freaking cognitive dissonance about ties making kids learn better. It just seriously farks me off.

This started as a twitter conversation with @Alexwintermute @lynnschreiber @ladycurd and @queenofbiscuits about insults and defining the acceptability of words. Actually, it had to do with calling people “love” and “duck” and “hen”; whether or not they are offensive or worth calling people on. I’ve been contemplating what I said for a few days now [you can also read that as too lazy to type my thoughts up] and this is my semi-illiterate musings since I wrote it at 3 am.

So, whilst I’m not necessarily enthused about strangers calling me terms of endearment, I wouldn’t ask them not to; unless they were using it in a patronising or offensive manner. I would, however, consistently call people out on using the term “girl” to define or describe me [or anyone else]. I find the term “girl” extremely offensive. We do not use the term “boy” to define adult men so why is it acceptable to use the word “girl” to define adult women. “Girl” is only used to objectify and belittle women. Yes, some women do like to use the term but I think that is because of patriarchal constructions of beauty which assume that older women aren’t worthy or important. There are only two constructions of women in the patriarchy: fuckable and unfuckable. Older women and those who do not conform are invisible; unworthy. Therefore, to remain “visible” women have to conform to the patriarchal definitions of beauty which privilege youth. So, women call themselves “girls” whilst spending fortunes on “beauty” products to make themselves look younger. They stop expressing their opinions for fear of being labeled a hag. Women become infantile to prevent bullying [and I certainly don’t blame any women for choosing this path. Being a target of hatred by the Patriarchal establishment is frightening].

I think, though, that “girl” is an incredibly misogynistic term used to silence women and its use, regardless of context, hurts women. There are other words which are misogynistic in usage, such as the use of “blonde” but it does not carry same level of systemic and structural oppression that “girls” implies. Blonde is inexcusable as an insult. “Girls” represents structural misogyny and the erasure of women from culture. And I don’t think individual ‘choice’ is a good enough excuse to use a term whose structural usage is the erasure of adult women from discourse. The “choice” doctrine is individualistic, narcissistic twaddle designed to elide structural and systemic oppressions from discourse; whether this be misogyny, racism, or homophobia. It merely obfuscates the issue and blames those who have neither the wealth nor the specific skill set to overcome oppression [usually this bit involves kicking a football around a field or being grossly over-paid to appear on shite TV programs].

The capitalist-Patriarchy profits off the insecurities of women; you only need view Boots’ horrendous “Here Come the Girls” advertising to realise just how much money is to be made making women feel old and ugly. I won’t buy products from any company which tries to label me “girl” and I assume any man using it as a compliment is either thick or sexist; neither of which are particularly attractive. “Girl” represents all that is wrong with rape culture and misogyny. We need to stop using it and stop pretending we can re-appropriate it from those who cause us harm.

I bought this yesterday in the Jubilee Kindle sale on Amazon. I really have to stop buying books based on price because, so far, it hasn’t gone well [Christa Allen’s Walking on Broken Glass being a prime case in point; nasty misogynistic rape/ domestic violence apologist shite]. I did buy Helen Castor’s She-Wolves: The Women Who Ruled England Before Elizabeth for 99p in the sale. I have high hopes for that book.

The basic plot of Megan Abbott’s The End of Everything is the disappearance of a 13 year old girl told from the viewpoint of her best friend. The product description is this:

Lizzie and Evie are inseparable. They walk home from school together, sleep over at each other’s houses, even flirt with boys together. And they tell each other everything. Or at least, that’s what Lizzie thinks — until Evie goes missing, and Lizzie suddenly realises their friendship wasn’t quite what she thought.

I have to say I find this description quite creepy. They don’t “flirt” with boys together. There are several scenes of “small sexual assaults”; one in which Lizzie is bullied into allowing a 16 year old boy touch her breasts whilst he masturbates. That’s not “flirting”. It’s a criminal offence. Dusty, the older sister of Evie, is being stalked by not just one boy who insists of parking outside her house night after night but by several other boys as well. There are no healthy sexual relationships amongst the teenagers. It is a catalogue of sexual abuse by teenage boys who believe they are entitled to abuse the bodies of two barely 13 year olds. Lizzie is incredibly naive about sexuality whilst Evie knows more than a child should.

And, that’s what I find really troubling about this book. What it really is about is Lizzie discovering Evie’s “secrets” which amounts to the long-term rape of her sister Dusty by Evie’s father. Evie “runs away” [and both Dusty and Lizzie define it in these terms] because she is jealous of her father’s relationship with Dusty. Evie is an emotionally abused child living in a house poisoned by incest. It is not her “choice” to run away with the child rapist; nor can she “consent” to her rape as Evie tries to justify it to herself. Her mother remains peripheral due her drug dependency although it is quite clear that the mother knows what is happening to Dusty and only emerges from her drug haze to care for Evie after she has been raped by the man who kidnapped her. All the adults in Evie’s life have let her down. Her best friend Lizzie is trapped in a delusion of “love” and is too blind to see Evie asking for help.

The book ends with Lizzie helping Evie and Dusty cover up the incest in order to protect their father [a man who tries to groom Lizzie after Evie disappears]. And, yes, it’s a book based on a 13 year old’s understanding of a situation that no child should have to understand but still the book read wrong to me. I was racing to finish it with a horrible feeling in the pit of my stomach hoping that the secret wasn’t what I thought it would be but it was. I really didn’t like this book. It just read false is so many ways. I can see what Abbott was trying to do but I don’t think she succeeded.