Another surfer in Australia is currently undergoing surgery having been bitten by what appears to have been a great white. This is only a few weeks after the media deluged us with footage of surfer Mick Fanning being pulled off his board by a great white. The media, showing a total disregard to little issues like personal space and trauma, had cameras jammed in Fanning’s face even before he’d made it to shore. Because shark attacks are super-cool for a 24 hour faux-media saturated culture. They are far more interesting than reporting on actual globally important news like war, genocide, male violence, and human rights abuses. Images of great whites breaching in South Africa are way more entertaining that a report on Nestle capitalising on a drought in California: 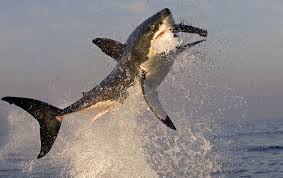 Sea World ought to capitalise on The Great White Entertainment Industry by replacing their Orcas with them. That way no will ask pesky questions about that little film Black Fish. No one will care about great whites trapped in cages. Just means less of them eating surfers.

I’m not an animal behaviourist and the only animal I anthropomorphise is my cat, so I have no idea if sharks actually confuse surfers with seals or, as this interesting article on the 3 surfers killed by sharks off the coast of Reunion suggests, some sharks are learning to see humans as an easy source of food, particularly for well-loved or injured members of the pack (which sounds rather sweet. And anthropomorphising). I just don’t see how dangling food off the side of boats so humans can swim in cages next to great whites does anything but teach them boat = food. Even without the anthropomorphising, sharks aren’t stupid. They follow the food and currently we’re tossing it off the side of the boats so this can happen: 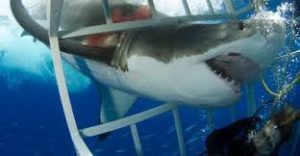 Although, it’s possible the second image isn’t actually meant to happen, but I have it on great authority that it also happened to Leonardo DiCaprio. And, if a shark can have a go at the bun-wearing, never-going-to-win-an-Oscar, and only-dates Victoria’s-Secret-models former star of Growing Pains, what chance do the rest of the nincompoops hanging about in cages have?

Having googled, Great Whites targeting boats isn’t exactly an unusual circumstance but what do we expect? Has no one seen an episode of Yogi Bear? There are reasons you don’t feed dogs from the table. Surely the same rule should apply to sharks? Don’t feed wild animals is a rule that doesn’t seem to apply to sharks, who, if you believe the media, are the only animal that actually eat people – though I suspect cougars starving in the mountains of North America might have a query or two about this particular theory.

Like with the bucketheads who yank the tails of nurse sharks napping in the sand off the coast of Florida and then who express surprise at being bitten (seriously, I’d bite someone if they insisted on waking me from a nap by trying to yank my finger from it’s socket), I have to wonder about the shark-viewing population.

Granted sitting on a boat in the freezing cold for 8 hours on the off chance you see an orca isn’t exactly exhilarating, but surely it’s better than enticing large mammal-eating creatures to hang out when we’re also mammals. I’ve yet to see evidence of sea lions deliberately swimming with great whites for funsies. And, humans should, at least, be slightly more intelligent than sea lions.

*Okay, the authority is the Mirror. But, they don’t totally exaggerate stories to sell papers.**

because this has to be one of the stupidest things I have ever read: 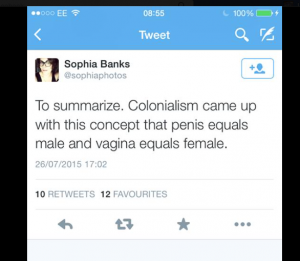 The province of Ontario needs to do some serious work on their social studies curriculum if this what their graduates come out with.

Shall we enumerate the ways in which Caitlyn Jenner has helped women:

1. Killed Kim Howe with his car.

2. Failed to financially support his children.

3. Stole his teenage step-daughter’s underwear to wear it around the house.

4. Reinforced neurosexism and heteronormativity with his stance on ‘female brains’ and ‘female souls’.

So, Bruce Jenner makes the list for doing sweet fuck all for women. Fabu-fucking-doodle. Next we’ll see Charlie Sheen on the list for not insulting, denigrating and threatening. one of the mother’s of his children for a period of 24 hours.

I made a formal complaint to the BBC here.

Caitlyn Jenner, a transgender woman who has killed a woman (Kim Howe) through dangerous driving, failed to financially support her children from previous relationships, and who admitted to stealing and wearing her step-daughter’s lingerie has been placed on Women’s Hour Power List. What precisely has Jenner done for women that negate killing a woman, financial child abuse, and stealing her stepdaughter’s lingerie (which in and of itself is deeply creepy)?

Could Woman’s Hour not find any women to place on this list that haven’t committed criminal offences like financial child abuse? Or, not killed anyone recently?

Jenner’s inclusion makes a mockery of the idea of a power list.