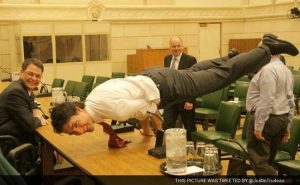 Trudeau is a feminist. We all know this since he says it every single time he’s interviewed. The media is obsessed with this narrative and Trudeau is regularly accused of ‘trolling the internet’ for posting pictures which revel in hyper-masculinity. 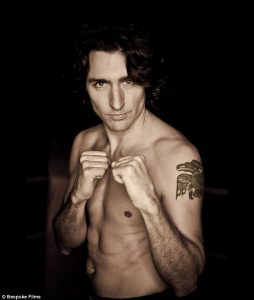 Much of Trudeau’s appeal is that he is a conventionally attractive white male who does yoga, charity boxing and loves kids. Almost as much as Barack Obama does. This is not ‘trolling the internet’. It is part of a deliberate campaign of image management – just like every other politician on the planet. David Cameron taking up yoga would not make him a better prime minister – nothing can compensate for the destructive and deeply misogynistic and racist policies that the Tory party has developed. Likewise, an attractive prime minister who enjoys a photo opportunities with babies – of the human and panda varieties – does not automatically guarantee good policies or even a commitment to feminism. 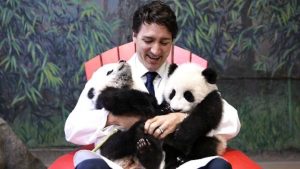 It is a failing of our culture and lack if critical consumption of media that we are infatuated with a prime minister who is under the age of 60 and has all his hair. We’ve learned nothing from the debacle of Tony Blair and ‘Blair’s Babes’. 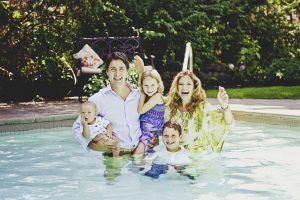 Trudeau grew up in the public eye. He knows the value of a carefully cultivated media construction, which is both serious and playful. It’s clear he is willing to be silly in the public eye but posing in a pool with his family isn’t a policy document. Before he gets acclaimed as the greatest prime minister ever, it’s best to have a passing acquaintance with his policies before we repeat the embarrassment of Barack Obama winning the Nobel Peace Prize for promising nuclear non-proliferation only 9 months after being inaugurated – what with Obama’s record of military intervention in the following years not being exactly on the side of ensuring World Peace. At the rate the media is going with it’s coverage of Trudeau: Feminist Superhero, he’ll win Women of the Year 2016, which is only slightly less embarrassing than Glamour voting Caitlyn Jenner despite the fact that Jenner is a republican who does not support a single right of women, including reproductive justice,  and the feting of Kellie Maloney erasing pesky issues like homophobia, racism and domestic violence (it’s worth noting here that attempted strangulation is a huge risk factor for fatal intimate partner violence).

The fact that a Trudeau has gone on record claiming to be a feminist is a good thing. It is essential that world leaders understand that women are oppressed as a class, but saying the words ‘I’m a feminist’ aren’t enough. They have to be followed through with actions and Justin Trudeau has simply not done enough for women for him to celebrated yet. A commitment to access to abortion for all women should be a basic requirement in a politician – not a cause for celebration. I have yet to read any statements from Trudeau on reproductive justice – something Aboriginal women are consistently denied.

His tax breaks are currently aimed at middle class families with a commitment to increasing contributions from the wealthy 1% and not those living in poverty, which isn’t exactly a Brave New World in political promises. The 2014 Liberal conference pledged to research a basic minimum income for all residents with the promise of Ontario trialling it. There are also promises around prescription charges, which are incredibly expensive particularly if you have disabilities or a long-term illness and no health insurance. This is all under discussion with some of Trudeau’s tax reforms conflicting with the research proposals on a universal basic income. A universal basic income is an inherently feminist policy. If Trudeau’s government follows through with these recommendations it will have an immediate impact on poverty, which disproportionately impacts women and all Aboriginal Peoples (First Nation, Inuit, and Metis).

Aboriginal communities across Canada experience systemic poverty and the consequences of Colonial practises which continue to this day, with the final residential school not closing until 1996. Access to healthcare, education, employment, and support services are sub-standard in many communities. Aboriginal women experience domestic and sexual violence and abuse at much higher rates than other Canadian women – including that perpetrated by white men. Aboriginal women are more likely to have their children taken into foster care if they exhibit trauma-symptoms caused by male violence. They are less likely to be given access to support services and are far more likely to be blamed for their experiences of violence.

Substance use is common in Aboriginal communities and is directly linked to trauma and poverty.  Many communities have taken extreme measures to support young people, particularly alcohol consumption and huffing. It’s not unusual to hear of RCMP officers stationed in remote communities dealing in illegal substances, including alcohol in those where it is banned. Racist and misogynistic violence against Aboriginal peoples by police is common at the national, provincial and local levels. “Starlight tours”, the practise of dumping Aboriginal peoples outside of the city limits by Saskatoon police was common in the 1990s – there is little documented evidence of it happening at other times but even the chief of police in Saskatoon believes it happened(s). These “starlight tours” resulted in the deaths by hypothermia of a number of people including Rodney Naistus, Lawrence Wegner and Neil Stonechild. I’ve yet to have heard any policies from Trudeau which will deal with these issues.

One promise Trudeau has already instituted is holding an inquiry into the missing and murdered Aboriginal women. Estimates suggest more than 4000 women disappeared during the last 30 years – the police, of course, have a lower number of 1200. The police of Canada aren’t exactly trustworthy when it comes to recording crimes against Aboriginal people – and aren’t exactly free of perpetrators either. This inquiry is absolutely essential to address Canada’s current racist and misogynist polices which have resulted in the abuse, trauma, disappearance and murder of Aboriginal women. However, this is not Trudeau’s policy but the consequence of decades of activism by Aboriginal women and their families culminating in a very distressing report written by Human Rights Watch on the disappearance and murder of Aboriginal women along highway 16, or Highway of Tears, in British Columbia.

If this inquiry is undertaken appropriately, and avoids the incompetence and possibilities of corruption seen in the UK’s Chilcot Inquiry into the war in Iraq, it will fundamentally change the way we understand Canada both historically and currently. However, Trudeau announcing that an inquiry will take place is not a sign of his commitment to feminism. His commitment will be demonstrated by ensuring that the voices of Aboriginal peoples are given priority during it and when any recommendations are put into place.

The inquiry will also need to address the disproportionate number of Aboriginal women forced into prostitution and other forms of sexual exploitation due to poverty, misogyny and racism. Trudeau supports the decriminalisation of the ‘sex industry’. This is not just the women, children and men forced into selling their bodies but includes decriminalising those who profit from the sexual exploitation of women.  There is nothing feminist about decriminalising pimps and there is nothing feminist about ignoring the fact that many of the missing and murdered Aboriginal women were vulnerable because they had no options other than prostitution. A decriminalisation policy which ignores systemic racism and misogyny within Canada is not feminist.

Before lauding Trudeau a feminist superhero, we need to see the following:

As it stands, Trudeau has the potential to be a transformative prime minister dedicated to instituting feminist policies, but he isn’t there yet and the obsession with his looks is simply demeaning to us all.

“Those Who Take Us Away: Abusive Policing and Failures in Protection of Indigenous Women and Girls in Northern British Columbia, Canada,” – Human Rights Watch

National Inquiry into Missing and Murdered Indigenous Women and Girls