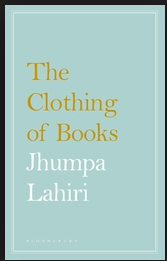 Jhumpa Lahiri’s latest The Clothing of Books is both an essay on the art of book jackets and  love story of books from the perspective of a reader and a writer. It is beautiful and thought-provoking essay examining the way in which book jackets impact on how a book is understood and marketed. It is a short read at 70ish pages, but also one of my favourite books this year.

I read The Clothing of Books the same day I started Han King’s The Vegetarian, which won the Man Booker International Prize (2016). King’s book is also beautifully written. It also exemplifies Lahiri’s thesis on the complex relationship between writers and their books once the publishing company takes control. And, not in a positive way.

The front cover of my copy of Kang’s book includes both the emblem of the Man Booker Prize and a not quite inappropriate quote from Ian McEwan who calls it a “a novel of sexuality and madness”. Unfortunately, I suspect McEwan believes that the two apply to the same character. They don’t.

The blurb on the back is the following:

A darkly beautiful modern classic about rebellion, eroticism, and the female body. One of the most extraordinary books you will ever read. 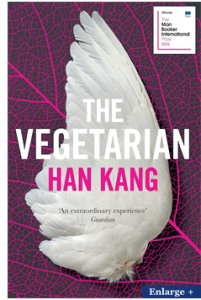 In the end, the only person who stays with Yeong-hye is her sister, yet none of the comments on the book jacket mention sisterhood as a theme within. In-hye does everything that is demanded of a women: she is financially successful, the mother of a son, does all the caring and lifework so that her husband, “the artist”, has no responsibilities. She is the quintessential “good girl”. And, is punished, repeatedly, for being so.

In The Clothing of Books, Lahiri ponders if those designing her book jackets or writing the blurbs actually bother to read her books. Reading The Vegetarian, I too wondered whether or not those writing the blurbs had read the book. Or, if they simply failed to recognise the patterns of male violence and its impact on women. As with Paula McLain’s The Paris Wife, which is described as “deeply romantic” on the book jacket, The Vegetarian,  demonstrates the unwillingness of readers and reviewers to define male violence as violence.

I gave The Vegetarian two stars on Good Reads. As I write this, I wonder if the number of stars is a reflection of the book itself or a visceral reaction to the book jacket’s definition of the book. There is certainly a huge disconnect between my reading of the text and the blurbs on the book jacket.