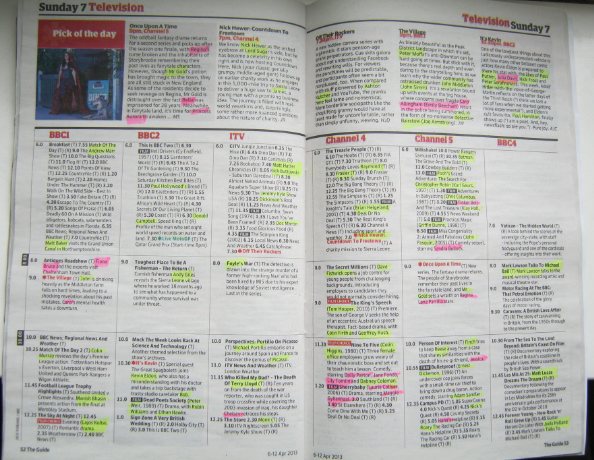 Sunday’s TV guide: 66 males and 18 females are named.
Reblogged from Tricialo
On Sunday after a morning lie-in I wandered downstairs, grabbed a cuppa and idly flicked through the channels on my TV. On every screen I flicked through, out of around 20 ‘favourites, there were only male faces, not one single woman or girl’s face showed up. It was all men talking to men, men talking about men, male actors acting out male dominated drama; there was Eddie, Nick, James, Jeremy, Simon, Frasier, Tony and on and on, on every channel. I went through them all again just to make sure; even the children’s channels were boy dominated. Some women showed up as I watched a little longer, but they weren’t onscreen when I’d first flicked through and in general women were either minor characters or absent. It wasn’t until around 10.30 that a woman fronted show turned up; something about food, with Lynda Bellingham.
People can come up with as many reasons as they like for explaining this, but I’d bet my life that no-one has ever yet flicked through all the channels on offer and seen only women’s faces. The words cultural femicide came into my head. Cultural Femicide is a term which was originally coined, (as far as I know), by Bidisha, to mean ‘the erasure of women in public life’.  This absence of women in mainstream culture, on our TV screens and radio, in theatres, movies, libraries and art galleries is hard to credit. It amazes me how little some people even seem to notice it, never mind care. The Women’s Room is one website set up to challenge this gendered cultural hegemony and provide a voice for women in media, yet even those few female voices we do hear tend to be the type that seeks male approval.

Back to Sunday; my five year old daughter was in the room with me and I considered the effect it might be having on her to repeatedly see men showing up as experts and authorities. I don’t let her have a lot of screen time, but as she grows older and wiser it’s increasingly difficult to monitor her intake and I’m not sure that it’s desirable to keep her in a protected bubble anyway. She asked me if she could have some screen time, but was bored by the boy dominated shows on offer. She seen the words Angelina Ballerina on the screen; a show we’d just missed, she’d recently seen an Angelina Ballerina book at a friend’s house and was curious about it so asked me to make sure that she could watch it when it was next on. We watched an episode together, on my laptop. As the theme tune began, my daughter commented, ‘It’s so pink. Why is everything always so pink?” The episode we watched concerned four mice, two ‘girl’ mice, (wearing pretty dresses), and two boy mice. It’s the only episode I’ve ever watched, (and ever hope to), and it actually centred on a ‘boy’ mouse called AJ. It was AJ’s birthday and the other mice were planning a surprise party for him. So, in what I imagined would be a show that was, if not ideal, at least girl centred, I watched as the two girls planned how to make a boy happy. As it ended I asked my daughter if she’d liked it. She answered that she would have liked it better if it had been about Angelina.

Later on I let my daughter watch a film; part of the Studio Ghibli series currently showing on Film Four. Studio Ghibli is a Japanese company, generally seen as being much more girl friendly than US studios such as Disney, and it’s played an important part in my daughter’s movie intake to date. There are some great Ghibli films, but as a canon it’s far from perfect, and yesterday, yet again, we watched as the girl in the story became a princess, a prospective bride and had to be rescued by male characters. The film was ‘The Cat Returns,’ in which a girl, Haru, rescues a cat from a near death collision with a lorry. Unfortunately the cat is a prince and Haru is now expected to become his cat princess. She is rescued by a team of male helpers; the heroic Baron, another male cat and a male raven. There is one female cat who tries to help her; Haru’s first comment upon meeting her is about how beautiful she is; a white cat with long eyelashes and a pink bow, not stereotyped at all then. The few other females in the movie are unsympathetic characters, such as the two cat maidservants who help Haru to dress and tell her how lucky she is because all the girl cats have crushes on the prince. Early on in the film, a delegation from the Land of Cats marches past Haru’s window and stops to talk with her. At this point my daughter piped up; “Are all of those cats boys?” Well spotted little one, best get used to it.

6 thoughts on “Cultural Femicide on a Sunday Morning”