Clint Eastwood has a very nice spread in Esquire with his son Scott in which he pontificates on being too important to raise his son and claiming that people who call out racism belong to the ‘pussy generation’. 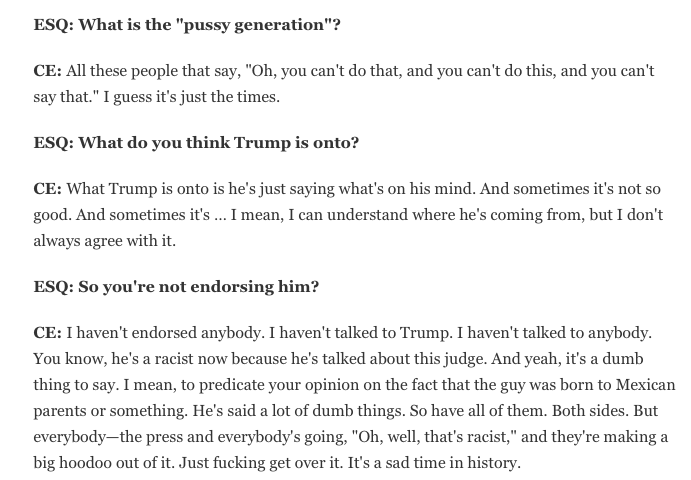 Have to say, I assumed Eastwood was dead what with being rather old. He’s certainly not lying about most things being deemed unracist when he grew up but that’s because he was born when segregation was legal. He was 34 when the Civil Rights Act came into effect in 1964. I’m not entirely certain that you can claim that the Jim Crow laws were a ‘big hoodoo’. Or that the implementation of the Civil Rights Act was worse than people calling out racism. Or, that people should just ‘get over’ racism.

But, hey, Eastwood is descended from a dude who arrived in the US on the Mayflower. So he can totally support Donald Trump because Eastwood is one of the ‘good immigrants’. And not one of those people fleeing civil war, terrorism and poverty who thinks that the message written on the Statue of Liberty still constitutes American law:

“Give me your tired, your poor, your huddled masses yearning to breathe free, the wretched refuse of your teeming shore. Send these, the homeless, tempest-tossed to me, I lift my lamp beside the golden door!”

The only thing going for him in the interview is that he doesn’t trash talk the mother of one of his children, which is something I suppose. He’s certainly not all that concerned about casual misogyny either.

So, life lessons from Clint Eastwood on being a ‘good’ man include not bothering to raise your children, racism is acceptable, people who believe in social justice need to get over themselves, and anyone who doesn’t agree with him is a pussy.