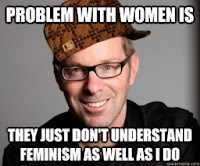 I was lucky to have only come across Schwyzer in 2010 on Mumsnet. A group of (white) radical feminists were discussing his latest “incident” [and I don’t remember which one as Schwyzer has a lot of incidents]. I asked who he was and they gave me the litany of the violence he has perpetrated against women, including nearly killing a former partner, his continuing sexual predation on young women who were his students as well as overt racism.

Having read all the links posted, I just assumed all feminists thought that Schwyzer was a manipulative sociopath who was using feminism as a ruse to get access to more young women.

I forgot what the “manipulative sociopath” bit meant. Schwyzer has succeeded for so long because women want to believe in the redemption narrative. We are trained from birth to believe that men have the ability to change through the “love of a good woman”. Lib Fems believed Schwyzer because he represents Third Wave “sex-positive” feminism. They believed him because they had too.

Critiquing Schwyzer means actually analysing the problematic nature of identity politics and “sex positivism” which privileges the male orgasm above all else, including the physical and emotional harm done to women. It means actually analysing the systemic and structural consequences of the Patriarchy. Hell, it means acknowledging the Patriarchy exists.

It’s very clear (for anyone who bothers to google) that radical feminists and WOC feminists/ womanists have been calling out Schwyzer for years. Jezebel and a disappointing number of mainstream feminist presses have allowed Schwyzer a platform for years. They have ignored his attacks on WoC and women who Schwyzer deemed as a “lower class” than him.

Schwyzer is a manipulative sociopath who has abused women for years. But, he has had help in continuing to abuse women. Every single feminist magazine which gave him a platform helped. By accepting Schwyzer’s redemption narrative uncritically, many Third Wave feminists have simply reinforced patriarchal norms.

Frankly, a man who lists himself as the head of a movement about women should always be treated with suspicion. And, any dude who brags about nearly killing a former partner should be placed in the dickhead pile. Not given a column in Jezebel.

Schwyzer may be a manipulative sociopath but a lot of women say through his behaviour and for this, they were ridiculed, dismissed and ignored. Feminism isn’t about men. It’s about women. The destruction of the patriarchy will result in men being liberated from oppressive gender roles but our first concern must be women.

Schwyzer has never stopped abusing women. Instead, too many chose to ignore the evidence of his abuse. Third Wave feminists did not believe women who stood up to Schwyzer. Believing women who speak out about their experience of male violence is a fundamental tenet of feminism. Anything else is patriarchal bullshit.

Schwyzer belongs on the #dickheaddetox. But, those who supported him uncritically also need to do some reflection and, in a number of cases, apologise.