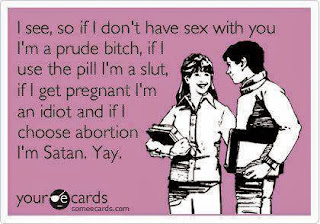 Matt Forney is the dudebro who wrote the “I love insecure women” blog currently making the rounds on Facebook. I’m not going to bother linking to his blog because he doesn’t need the hits. Instead, I’m just going to include a few “choice” paragraphs on his misogynistic drivel about women. Whilst reading below, do remember that the tagline for his blog is “The Man Who Shouted Love at The World”:

Whenever a girl I’m talking to brags about how she’s “confident” and “strong,” I can feel my dick deflating like a punctured tire. I’d still bang her, of course; a repellent personality doesn’t negate the fact that she has a slammin’ body. But a crucial part of the attraction is lost. I’d be less offended if she ripped a fart in my face.
The idea that women should have self-esteem or need it, beyond a low baseline to ensure they don’t commit suicide or become psycho stalkers, is one of the most disastrous social engineering experiments of the modern era. A woman with excessive confidence is like a man with a vagina. It’s an attribute that is at best superfluous and at worst prevents women from fulfilling their natural biological and social functions.
…

In order for America to right itself, there needs to be a massive and concerted war on female self-esteem.

From the moment they’re old enough to speak, girls in America are bombarded with propaganda that artificially boosts their self-esteem. They’re told that they’re shpecial and you-nique because they have an extra X chromosome. They’re told that they’re smart, that they can do anything, that they deserve respect merely for existing. They’re encouraged to derive self-worth not from their inherent feminine nature but from their college degree, their job or the other illusory trappings of achievement in a man’s world.
Combine this with the white-knighting tendencies of fathers and the sexual attention that attractive girls already get from puberty forward and you have a complete social meltdown in the making.

Here are my reasons why girls should be discouraged from being confident.

1. Most girls have done nothing to deserve self-esteem.
…
2. Insecurity is integral to femininity:
…
Confidence doesn’t give men erections; vulnerability does.
…
Essentially, “confident” women are incapable of viewing men as human beings.
…
3. Women don’t want to have high self-esteem.
…

Feminists can claim that women don’t need men, but their actions put the lie to that; they need us far more than we need them. Girls will all but die without masculine attention. Hell, I’m even starting to think that the feminist agita about “rape culture” is part of this as well. Pushing lies like the claim that one in three women will be raped during her lifetime and their constantly expanding the definition of rape are ways for feminists to indulge their desire for vulnerability in a way that doesn’t conflict with their view of themselves as “strong” and “empowered.”

At the end of the day, there are no Strong, Independent Women™. There are only shrews pleading for a taming. All the posturing, the pill-popping, the whining and demands for “equality”; they’re a cry for help. Girls don’t want the six-figure cubicle job, the shiny Brooklyn 2BR, the master’s degree, the sexual liberation, none of it. They want to be collectively led back to the kitchen, told to make a nice big tuna sandwich with extra mayo and lettuce, then swatted on the ass as we walk out the door.

I say we give them what they want.

I say we give Forney what he’s so clearly demanding: a place on the #DickheadDetox and a lifetime of celibacy.

One thought on “#DickHeadDetox : Matt Forney for being an arsenugget”