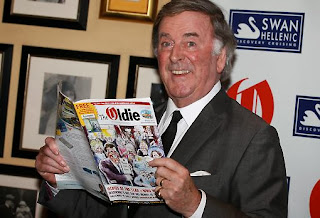 There is a never ending parade of old, white dudes too stupid to understand their privilege. Terry Wogan is just one of a huge pile of dickheads who’ve got their arses shoved so far up their arse that they genuinely believe their own bullshit.
I could rant for hours on old, white dudes whining but Frances Ryan got there first. The following are from her great piece in the New Statesman:
There seems to be an epidemic in television of middle-aged to elderly men thinking that they have important thoughts on women on television and that those thoughts aren’t the rantings of a sexist berk. If it isn’t John Inverdale, it’s Alan Titchmarsh talking about women “whingeing” when their careers get cut short once they hit 40. Women, such moaners! They really should take being dumped because their skin isn’t tight as it used to be with more decorum. Anyway, as Wogan helpfully reminded us, they’re happy enough to use their looks to their advantage when they still have them.
I wonder though, according to men like Wogan, what exactly are women in television meant to do? If they stick their head in a paper bag during their twenties or make sure they look like they’ve been eating some pies, are they allowed to complain when they get pushed out at forty? It’s just the ones that looked attractive at the start of their career that can’t complain when they’re later dumped for no longer being attractive, right? Because they’ve “used” their looks to get them where they wanted to be.
…
Women in television, much like those out it, are in a no win situation. They have to be slim and glossy to get and stay in work. If they’re slim and glossy they’re accused of only getting work because of their looks – and find themselves signing up to and perpetuating the culture that’ll throw them out the door when it all starts to sag.
Wogan unwittingly says it all when he speaks of presenting Children in Need with his “lovelies” (a.k.a grown women Tess Daly and Fearn Cotton). TV is still content with a particular set-up: the aged man (generally over 70) and the pretty young co-presenter (half his age and painted into a distracting dress). As long as that culture exists, women who want to work will have to go along with it. And wait for elderly, still-successful men to tell them they brought their short careers on themselves.
Let’s be totally honest here: if men were held to the same standard of physical beauty as women, Wogan would never have made it as a DJ; never mind the jump to television. Wogan’s career is because he is a white dude who reinforces patriarchal norms in both his actions and words.
Daly and Cotton are surviving in a capitalist-patriarchy which hates women. I blame the men who perpetuate it; not the women trying to survive.