This article was first published by Everyday Victim Blaming.

Sebastian Trotter was pled guilty to sexual assault and was placed on the sex register for six months, given a six-month offender’s supervision order, and ordered to pay the victim £500. The Edinburgh Evening News used this headline: “Newly-wed accountant’s career in ruins after sex attack”. Following complaints on twitter, the article heading was switched to “man on sex offenders register after groping women in nightclub”. You will note that Edinburgh Evening News chose to change the term “Sex attack” for “groping” – a word that is frequently used to minimise the criminal act of sexual assault. 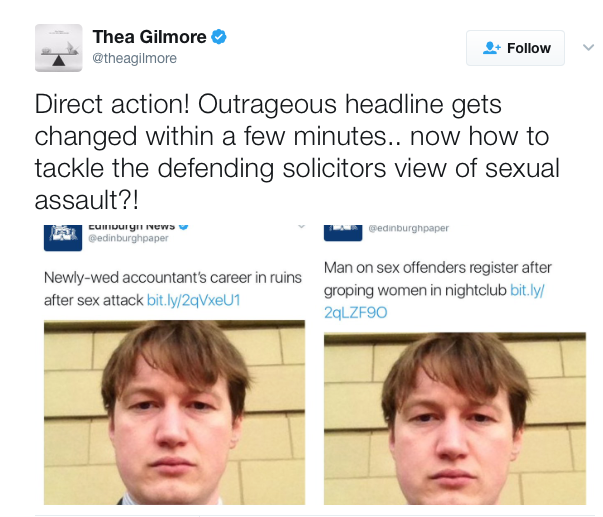 This is still the subheading:

A CHARTERED accountant’s career is in ruins after he was placed on the sex offenders register.

This suggests that the perpetrator’s career is more important than his criminal convictions for sexual assault.

Our campaign focuses on victim blaming within the criminal justice system and the media. We believe that mandatory specialist training, from outside organisations, is a basic requirement for police, judges, juries and journalists. This article, written by Alexander Lawrie, demonstrates all the failures of the media in reporting violence against women and girls. It has focused on the perpetrator’s career rather than his criminal act. It has minimised the criminal act. It has also published this statement by the defence attorney:

This lady had her night ruined but I don’t think there has been any lasting damage, if I can put it that way.

Quite frankly, the defence attorney needs a new job. There is no need to use such offensive language. Equally, it is utterly irresponsible of the Edinburgh Evening News to publish such a statement without comment. Rather than covering the hearings of a man who pled guilty to sexual assault accurately, the Edinburgh Evening News have simply published a defence for all men: “your career is more important than any criminal act, it wasn’t that bad and the victim is whining if she suggests otherwise”. This is what rape culture looks like: a man guilty of sexual assault having his hand held by a local newspaper as though he were a small child getting a vaccination. This is what bad journalism looks like.

Zero Tolerance, an organisation based in Scotland, have created an easy-to-read media guide on accurate reporting of violence against women and girls. The National Union of Journalists have a very short document on how media should report these crimes.That mainstream media continue with inaccurate, misleading and victim blaming coverage of male violence against women and girls is not through a lack of awareness. The research on the impact of inappropriate media coverage is well-evidenced. The negative impact on victims abilities to access justice is clear. The excuses for male violence so obvious. Yet, mainstream media continue to publish such reprehensible articles regardless of their impact.