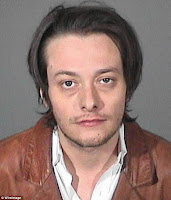 (This blog has been rewritten to reflect the comments raised below)

Edward Furlong has been arrested for domestic violence for the third time in as many months and has pled not guilty to the battery charge. He already had an outstanding warrant for his arrest stemming from a previous incident of domestic violence.

The Daily Mail have, once again, surpassed themselves with the coverage and suggested that the

“actor’s colourful personal life includes being sued by an ex-girlfriend, 14 years his senior, for ‘assault’, and ex-wife Rachael Bella filing for divorce before hitting him with a restraining order.”

Edward Furlong does NOT have a “colourful personal life”.

His history of drug and alcohol addiction is well-documented. He has multiple DUIs and numerous stints in rehab. He was also the victim of child sexual abuse at the age of 14 when, as Wikipedia so quaintly puts it, he “began a sexual relationship with his 29-year-old former tutor, Jacqueline Domac, who became his manager for several years.” They “separated” in 1999 and Domac sued Furlong for assault and 15% of his earnings. He was a damaged child who became a damaged adult.

However, his history of violence is also well-documented; neither his drug and alcohol abuse, nor his history of child sexual abuse, are excuses for the level of violence Furlong has perpetrated against women. He may be a damaged adult but that does not negate his personal responsibility for violence. We can pity the child whilst holding the adult accountable for his actions.

Furlong’s ex-wife has a restraining order against him for violence and stalking. He has recently been prohibited access with his son without supervision. His son, aged 6, had tested positive for cocaine whilst spending time alone with his father.  He has two arrests for DUI and public intoxication. His recent arrests, on October 30 and again on November 21, were for domestic violence against his then girlfriend. He has now assaulted the same women, his ex-partner, for the third time. These are the actions of a violent man.

Apparently, Furlong has now been fired from two films for his violence; not because it was “bad” but because his legal problems are costing the filmmakers money. This is why we need a #dickheaddetox. Violent men should not be celebrated. Furlong should not have been hired for these films in the first place. Of course, this is an industry that allows the equally violent substance abuser that is Charlie Sheen to star in numerous television shows. And, has an audience willing to financially support a man with a serious history of VAW.

Edward Furlong is a violent drug addict who has been proved to be a danger to at least three previous partners. At what point is his propensity for violence going to be taken seriously?