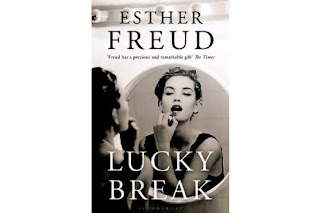 I have to admit here that I never heard of Esther Freud before getting a freecopy of this book from the Mumsnet [non-feminist] fiction book club. I have vague recollections of thinking that I might enjoy watching a Kate Winslet movie called Hideous Kinky but I don’t think I ever got around to actually watching it.

Clearly, this was a massive over-sight on my part since Lucky Break is fucking brilliant [and that’s not just because I’m still cranky about wasting my time reading the misogynist wankfest which was Paula McLean’s The Paris Wife last month]. It is well-written, funny, engaging with a host of characters that you might actually want to be friends with – as well as some men that should immediately put on the list of undateable wankers.Loved the fact that she left the ending open so I could choose their futures. It’s the only disappointing bit of Kris Radish’s The Elegant Gathering of White Snows. The epilogue was unnecessary and ruined my fun of deciding the happiness of the characters. I like the fact that Freud leaves us with an ending which isn’t really an ending. I like being able to believe that Jemma dumps the useless selfish narcissist Dan and waltzes off into her own successful career as a screen writer and actress with 4 children under ten in tow whilst he gets stuck playing a chicken in really bad ads which only air at 4 in the morning. Or, that Nell is actually the successful and incredible actress she deserves to be and finds a real partner and not the usual arsehat that successful actresses end up with in real life. I also hope she waltzes back to the “drama school” she attended and gets to make fun of the directors there who didn’t recognize the real talent when it was in front of them. I like the fact that I can believe that Charlie is finally happy with who she is instead of what she thinks should make her happy.
So, this is obviously an outstanding recommendation since it does deal with the issue of the “casting couch”; that lovely euphemism for the sexual exploitation of women within the industry and the total failure of the industry to take that exploitation seriously. It deals with being invisible for not being a “proper woman” and reading this in conjunction with Sheila Jeffries’ Beauty and Misogyny for FeMNist non-fiction book club this month was a real pleasure. They meshed so well with Freud demonstrating some of those very real harmful cultural practices outlined by Jeffries [and the suggestion of using spanx as rain gear is just genius].
Book Chat tonight with Esther Freud.