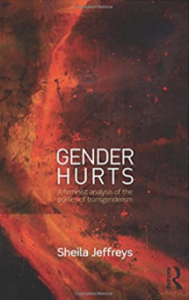 Whilst there is much to commend this book in addressing the political implications and regressive policies surrounding the social construction of transgenderism, it suffers from poor writing technique, such as the unnecessary use of the word conclusion at the end of chapters and a constant repetition of statements made in the introduction in various chapters – sometimes every chapter. Each chapter was sub-divided into sections that are constructed as mini-essays and divided by headings. Frequently, these mini-sections end in a sentence repeated immediately in the first sentence of the next part. This is simply poor editing, as seen elsewhere in the repetition of phrases:

“ The men who engage in upskirting are a varied group, including male tennis fans at the Australian Open …, male school students who uploaded film of a teacher onto the Internet …, and even a male urologist. In a case in New York in August 2012, a respected urologist extended his professional interest into a new direction, and was arrested for filming up a woman’s skirt on a station platform” (p. 154-155)

As a one-off this sentence would not have bothered me, however this level of repetition did get tedious in a 200 page book. It’s not like there’s a dearth of research into the trend of ‘upskirting’ and the types of men who commit this criminal act (which can be reduced to all men are capable of doing so regardless of class, race, faith, access to education etc).

Another issue is the failure to engage with a wider variety of primary sources, academic research and media coverage. There is simply far too much evidence and theory dependent on Jeffreys own work. This would be acceptable if she were the only person engaged in this type of research, but she isn’t and hasn’t been for several decades. That the work of other women into the impact of transgenderism on women’s rights has been silenced by academic publications and a media obsessed with being ‘right’ as opposed to being truthful is something that Jeffreys could have challenged by referencing all of these works. Instead, there are places that resemble a university reading list by male academics with tenure that list only themselves in the ‘required reading’ section. Perhaps this is unfair, but I do expect more from feminist writers and activists.

When Jeffreys does engage critically with sources, especially whilst reading ‘pro-trans’ testimonies, her insight is excellent. It is unfortunate that more of the text was not given over to such analysis. As it is, careful editing would have knocked the text down to 120-140 pages rather than a 190 giving space for more direct evidence and critical engagement. Chapter 4 – ‘A gravy stain on the table’: women in the lives of men who transgender – written with Lorene Gottschalk is the strongest section in the book as it involves a close reading of supposedly positive testimonies of the lives of women whose male partner are transgender. It is very clear from these testimonies that the emotional, psychological, and financial impact on women is dismissed or erased by academics and writers.

Chapter three entitled ‘Doing transgender: really hurting’, also written with Lorene Gottschalk, and chapter 6 ‘Gender eugenics: the transgendering of children” are equally powerful. I am always shocked by people who ascribe the medical and pharmaceutical industries with concern for the health of transgender people without any discussion of the motive of profit. Or, the theory that the medical establishment is somehow truly honest in their approach to treatments, such as puberty blockers in children, despite the lack of long-term research on the effects or their well-documented history of prioritizing profit over people (development of birth control being a case in point!). I wish Jeffreys had gone further in deconstructing the lack of evidence-based research into treatment, the statistics on suicide post-transition, and the histories of those researchers and scientists pushing transition of children.

There is quite important research and theory in Gender Hurts. It’s unfortunate that Jeffreys spent more time congratulating herself rather than on the research itself. In this poorly written text, there are some incredibly important discussions and questions that simply did not get the space they deserved.