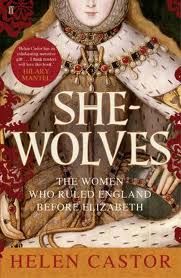 I couldn’t put this book down. Helen Castor has a real gift for prose; a rare gift among historians. The hours I’ve wasted reading badly written historical texts in my life are extensive so this was a joy to read. I also knew next to nothing about the 5 queens that Castor profiled: Matilda, Eleanor of Aquitaine,  Isabella of France, Margaret of Anjou and Mary Tudor. She-Wolves: The Queens who Ruled England Before Elizabeth is a fascinating and quick read. There are some problems with the text; notably the complete lack of footnotes and sources. I understand this was written as a piece of “popular fiction” but the inclusion of the bibliography at the back was not enough. I want to read more about these four women but it’s hard to tell which would be the best texts for me to read next.

Castor’s respect and admiration for these five women, however flawed they were is evident, but this is still a military history of battles and men. Yes, this testifies to the paucity of primary source material on the lives of these women but the book is still focused mainly on military history, dynastic squabbles and male temper tantrums. There is very little about the women themselves and much of what Castor writes focuses on their military and political battles. In many ways, this is a very traditional “history” text, albeit one written about women.  Castor simply doesn’t make enough of the social and cultural milieu in which the women lived. She focuses on the military history to the exclusion of the households and courts of the women themselves. They are all defined in relation to the men they married or birthed.

Castor also leaves numerous questions unexamined. She claims from the start that these 5 women were prevented from becoming true queens because of their inability to lead armies. Her first evidence of this is Matilda’s inability to lead an army to fight Stephen who ousted her from her thrown. Yet, less than 20 pages later, Castor claims that Stephen’s wife lead an army against Matilda’s troops. Why could King Stephen’s wife, a queen consort, lead an army whilst the ousted Queen Matilda could not? These women also lived across 4 centuries and Castor makes very little of the changing political and social structures which dramatically changed the women’s ability to claim the thrown. After all, Matilda was English -born [but the granddaughter of William the Conquerer] whilst Isabella, Eleanor and Margaret were all foreign-born. Mary become queen by dint of being properly English [and a Tudor]. That makes a significant difference.

I did enjoy this book as Castor’s gift for writing compensates for any problems within the text. It isn’t the best text for learning more about these 5 Queens of England though. What She-Wolves does demonstrate, more than anything I’ve read in a long time, is cultural femicide: the complete erasure of women from culture. The fact that there is simply not enough evidence of the lives of these 5 women to write a history without basing it on their relationships with men is cultural femicide.

As ever, I would love recommendations for histories of these women!