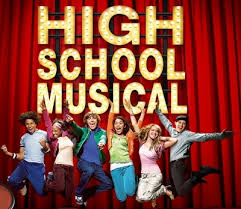 Granted High School Musical 3 has a rather unnecessary number of shots of Sharpay Evans’ arse and there is a very clear evidence of bullying by the two main male leads: Troy Bolton and Chad Danforth who steal the clothes of two younger classmates and make them chase them through the school dressed only in towels. In HS-land this gets the bullied boys detention. In my-land, it gets the two bullies an in-school suspension and a ban from participation in after school activities because it constitutes sexual harassment. And, I can’t even begin to describe the horror which is the Tiki song in High School Musical 2: racism a go-go there.

There are also very few non-white actors in the films. The best friends of the two leads are both African-American but they both are stereotypes. Chad Danforth is basketball obsessed and a loyal friend. Taylor McKessie is bossy, demanding and over-organised. Her character is also incredibly intelligent and loyal to her best friend which is a departure from many portrayals of African-American characters in Disney films. But, they are still only supporting characters living stereotypes of what “good” African-American teenagers are interested in: boys do basketball and girls do smart & over-bossy. On the other hand, the main character Gabriella Montez is Hispanic-American, which is a major departure for mainstream Disney programs. Disney does feature non-white actors but only in supporting roles and frequently as crass stereotypes.

We can’t forget the issue of class as every single one of the characters lives in a huge house, including Gabriella Montez whose mother is a single parent. Poverty is never an issue. In fact, the characters can afford to just hop on planes and fly 1000 miles without so much blinking about the credit card charge. Obviously, abuse doesn’t exist and no one has any disabilities. It is the American Dream: a white heteronormative culture.

There are also serious problems with gender stereotyping. The mothers of all the teenagers are shown in kitchens only bringing in groceries, baking snacks, serving food, and interrupting private moments between teenagers. Fathers, on the other hand, are actively involved in coaching sports and being ‘cool’. The drama teacher is OTT in the ridiculous and Sharpay, well, Sharpay is a blond narcissistic ice queen who treats everyone like shit. Because, that is oh-so-original.

Yet, High School Musical is probably one of the most feminist films Disney has ever produced. The main character Gabriella is a “good” girl who wears virginal outfits. But, she’s also intelligent, loyal and prone to speeches on everyone working together. She changes everyone for the better by encouraging them to be true to themselves. She’s also true to herself valuing her education over her boyfriend. Gabriella isn’t mean and she doesn’t take shit from anyone. Yes, there is an unnecessary amount of twaddle about boyfriends and girlfriends and loving one another forever but Gabriella is an inspiring female character. The value placed on friendships between the teenage girls is so very, very different. With the exception of Sharpay, the girls support one another through their dreams, their hobbies and their lives.  They work together for each other and they talk about the importance of valuing yourself as an individual over any potential relationship.

It’s not a perfect feminist film but it’s a start. And, in a complete departure from normal Disney narratives, the boy follows the girl to university.