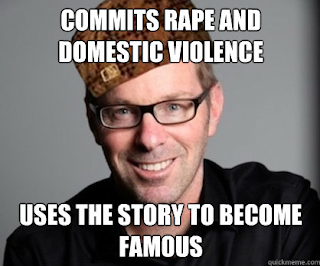 Last Friday, Hugo Schwyzer, the so-called feminist, had what appears to be a very public meltdown on Twitter having claimed to be leaving social media forever because of mean, nasty feminists holding him publicly accountable for the violence he has perpetrated against women. I did not write about Schwyzer because I am still not sure that he genuinely had a meltdown or if the past two weeks have been nothing more than his normal manipulative, sociopathic behaviour. I didn’t write about his recent behaviour because I didn’t want to give him any more attention.

I was guilty of that which I railed against last year [below]: of ignoring Schwyzer’s racism. And, it never even occurred to me that that was what I was doing.

Yesterday, I witnessed a number of women of colour, including @thetrudz, calling out the white feminists who have supported Schwyzer over the years. And, I witnessed the silence of those very feminists. Those who did answer said what I had thought: that writing about Schwyzer just encouraged his manipulative behaviour. I made this about Schwyzer without thinking of the women who Schwyzer has hurt. They are who we should be writing and thinking about: the women who have been manipulated and abused by Schwyzer. I ignored the racism inherent in the worship of Schwyzer and I ignored my own role in perpetuating the white supremacist patriarchy by supporting the silencing of my sisters voices.

In ignoring Schwyzer, I had ignored the lives of women he has abused, many of whom are women of colour. For this I am sorry.

@thetrudz has storified her tweets here.

I wrote this last year and I stand by it.

Normally, I’m not one for telling people whether or not they can self-define as feminists. I think it’s rude and pointless. We all come to feminism from different perspectives and are all at different points of our feminist journey. It’s counter-productive to insist on the right to label, or not, others. That said, there some pretty basic tenets of feminism that aren’t negotiable. Perpetrators of domestic violence, rape and other forms of MVAW aren’t feminists. I do think it is possible for men who express anti-feminist statements to change. I don’t think violent men can change enough to ever be feminists.

This is why I am genuinely perplexed by the fawning that Hugo Schwyzer receives. He has consistently minimised his history of violence against women. Schwyzer writes of being an “accidental rapist” and“accidentally endangering” a former partner in a murder-suicide attempt.

I have no time for men who seek to minimise their personal history of MVAW by claiming personality disorders or drug addiction. Being a feminist means taking responsibility for one’s actions and the consequences therein. Claiming that an episode of MVAW was “drug-fuelled” isn’t taking responsibility. It is minimising one’s responsibility. There is a huge difference between the statements “I am a recovering drug addict but my addiction does not minimise my culpability for the violence I committed” and “it was accidental VAW because I was stoned”.

One is forgivable because it involves genuine remorse. The other is not.

Hugo Schwyzer needs to start listening to women. He needs to start acknowledging that there are valid reasons that women find him frightening and then he needs to stop trying to intimidate them into silence. When he stops trying to silence women, I might be willing to engage with his work. As long as he continues to embrace the silencing of women who disagree with him, Schwyzer will never be a feminist.

And, let’s be realistic here, if Mike Tyson, who has a similar history of domestic violence and rape, were to start referring to himself as a feminist whilst blithering on about hegemonic masculinity, no feminists would be lining up behind him to stroke his ego and insist on his admittance to feminist spaces. We’d be laughing our asses off at him. Schwyzer is allowed in because he’s white. That’s a huge problem that white feminists need to address because we are silencing our sisters by allowing Schwyzer to continue pontificating as if he were the Messiah of Feminism.

2 thoughts on “Hugo Schwyzer is not a Feminist Redux:”