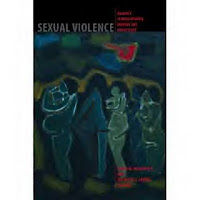 It is an honour and a privilege to be a contributor to this text and I cannot thank Rochelle G Saidel and Sonja M Hedgepeth for their tireless work in ensuring that Jewish women’s experiences aren’t forgotten. It is a testament to their work that  Sexual Violence Against Jewish Women During the Holocaust was one of the key pieces of research that led to Gloria Steinam to founding the Women Under Siege online project. It features 6 conflicts during the 20th century in which rape is used as a tactic of war: Holocaust, Bangladesh, Rwanda, Darfur-Sudan, Egypt and Libya as well as blog posts on sexualised violence in other war zones in the 20th century. The erasure of the gendered experiences of women in war from mainstream political and historical analysis is shameful and the most concrete example of Patriarchal-Capitalist Misogyny in practise.

This International Women’s Day, we need to stand up for these women and make sure their voices are heard; that their experiences are no longer white-washed out of history in order to support the aims of the destructive patriarchal  military-industrial complex.

Sexual Violence Against Jewish Women During the Holocaust Contents

Death and the Maidens: Prostitution, Rape and Sexual Slavery during World War Two by Nomi Levenkrom

Schillinger and the Dancer: Representing Agency and Sexual Violence in Holocaust Testimonies by Kirsty Chatwood

“Only Pretty Women Were Raped”: The Effect of Sexual Violence on Gender Identities in the Concentration Camps by Monika J. Flaschka

The Tragic Fate of Ukrainian Jewish Women Under Nazi Occupation, 1941-1944 by Anatoly Podolsky

The Rape of Jewish Women during the Holocaust by Helene J. SinnreichRape and Sexual Abuse in Hiding by Zoe Waxman

Reproduction Under the Swastika: The Other Side of the Glorification of
Motherhood by Helga Amesberger

Forced Sterilisation and Abortion as Sexual Abuse by Ellen Ben-Sefer

4. Sexual Violence in Literature and Cinema

“Stoning the Messenger”: Yehiel Dinur’s House of Dolls and Piepel by Miryam Sivan

Nava Semel’s And the Rat Lauged: A Tale of Sexual Violation by Sonja Hedgepath and Rochelle Saidel

Sexual Abuse of Jewish Women during and after the Holocaust: A Psychological Perspective by Eva Fogelman

The Shame is Always There by Esther Dror and Ruth Linn