This week’s guest blogger on Mumsnet is Holly Baxter from Vagenda as part of the 16 Days of Activism on VAW. I am genuinely at a loss as how to adequately express my rage and my disgust at the article Baxter wrote. Baxter has used the mass murder of 14 women in Montreal as a way of attempting to make a political point about the inclusion of men within the feminist movement. Now, I fundamentally disagree with Baxter on the issue of men’s involvement in feminism as I have explained here and here, but, even if I did, I can not begin to imagine how the inclusion of men in one feminist event is necessary because one violent man killed 14 women.

This is the image Mumsnet chose to run in conjunction with the blog. On a blog referencing the murder of 14 women.  I have no words for this. 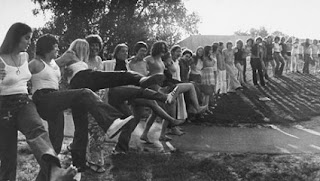 Tonight, I am too angry to write a proper response to Baxters’ blog. Instead, I want to remember the 14 women who Baxter failed to name in her post; 14 women who were murdered by a man who hated feminists:

There have been two murder-suicides this weekend: Jovan Belcher killed his girlfriend Kasandra Perkins before killing himself.  Keith Johnson killed his wife Andrea before killing himself. Today, two sets of families on two different continents are mourning the loss of their daughters; both murdered by their partners. Two women a week in the UK are murdered by the men who claimed to love them. Despite this fact, press coverage is always about what “nice” men they were. The coverage does not focus on the women murdered but on the careers and personal characteristics of the murderers. The coverage of the deaths of Kasandra Perkins and Andrea Johnson are no different.

The BBC coverage of the murder-suicide in Cromer includes these statements:

Fellow Conservative councillor Trevor Ivory, a friend of the couple, said: “It’s a complete shock. I last saw them both on Thursday evening and they were both very happy and seemed to be enjoying life.

“The words Cromer and Keith Johnson are synonymous. He typified what’s good about the town and the district of North Norfolk.”

In a statement, North Norfolk Labour Party paid tribute to Mr Johnson. Chairwoman Denise Burke said: “The death of Keith is a tragedy and a massive loss to Cromer and North Norfolk, too.

“Keith has been a real public servant throughout his life and will be sorely missed by the whole community. He was much respected across the political spectrum.

“Our thoughts are with Keith’s friends and family at this time.”

If Johnson typified all that was good about Cromer, then they have some serious problems. This man murdered his wife and he will be sorely missed? What about his wife Andrea? Will she be sorely missed? Andrea barely gets a mention in the article. We know that the man who murdered her was a well-respected career politician but, his wife, just an addendum to the story. Was Andrea’s death not a tragedy? Just the death of her murderer?

Jovan Belcher shot his girlfriend Kasandra Perkins before shooting himself in front of the coach and general manager of his football team, yet this story focuses on the fans and the team:

Although the game was unimportant — especially with neither the Chiefs (2-10) nor the Panthers (3-9) bound the playoffs — it did provide some relief for the team and community.

Kasandra is just as absent from this article as Andrea. There is no discussion of the grief of her family and friends. There is no mention of her life at all. Both Andrea and Kasandra are being written out of the story of their murder whilst the eulogies of their murderers begins.

This is the War on Women. Not only do we pay for the hyper-masculinity within the Patriarchy with our bodies through rape, torture and our deaths but we are also written out of the stories of our own lives.

I await with sadness the inevitable stories to follow which will blame the women for their own murders.

UPDATE: This is an excellent article by Heather Harvey on the issue of male violence within patriarchal family structures.