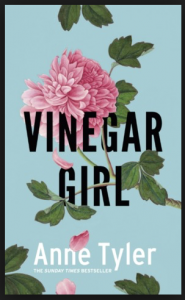 Anne Tyler’s Vinegar Girl is part of Vintage Hogarth Shakespeare 400th anniversary series, which sees modern writers reinterpreting Shakespeare. Generally, I’m not a fan of Shakespeare finding the desperation to name him the greatest writer ever deeply tedious with an unpleasant under current of nationalism, racism, misogyny and classism. I only came across the series when I read Jeannette Winterson’s retelling of a Winter’s Tale (Gap of Time), which is excellent. I had never read Tyler, but had high hopes based on this description:

“Kate Battista feels stuck. How did she end up running house and home for her eccentric scientist father and uppity, pretty younger sister Bunny? Plus, she’s always in trouble at work – her pre-school charges adore her, but their parents don’t always appreciate her unusual opinions and forthright manner.

Dr. Battista has other problems. After years out in the academic wilderness, he is on the verge of a breakthrough. His research could help millions. There’s only one problem: his brilliant young lab assistant, Pyotr, is about to be deported. And without Pyotr, all would be lost.

When Dr. Battista cooks up an outrageous plan that will enable Pyotr to stay in the country, he’s relying – as usual – on Kate to help him. Kate is furious: this time he’s really asking too much. But will she be able to resist the two men’s touchingly ludicrous campaign to bring her around?”

It was a complete let-down.