I was unsure about writing this. H’s disclosure of rape in the New Statesman was incredibly brave and I do not want to bring more rape apologists and their handmaidens into her mentions. Yet, I’m still horrified by the reactions of certain feminists to H’s disclosure. Rather that simply stating the feminist imperative “I believe you”, Sara Ahmed, a professor at Goldsmiths,  wrote that she would “challenge every word” of H’s article. This is simply because Hewitt pointed the value of female-only space for her as a victim of rape. Ahmed was more concerned with making a political point that supporting a rape victim.* This is the point we have arrived at with transgender politics – instead of listening to victims and ensuring that there are support services for everyone, women are being told they have no right to a service that reflects their needs because others are more important. 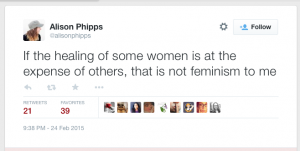 I have NEVER seen a single person suggest that transgender people have no right to support services. I have seen numerous women – and not just radical feminists – state that their experiences of male violence are so traumatising that being forced to share with anyone socialised as male is impossible. Whilst transwomen may have felt they were in the wrong body from birth, it doesn’t erase the socialisation of male privilege – including the fact that teachers still consistently favour boys over girls in class discussions. It isn’t anti-feminist to demand that every single person who has experienced male violence have an appropriate space that meets their needs at the most difficult time of their life.

Phipps, in further tweets, suggests that if a female student discloses rape to her using language Phipps deems ‘transphobic’, Phipps would immediately challenge their transphobia. The last thing a rape victim needs is someone telling them that their support needs are wrong or hateful. It is precisely this type of suggestion that makes university policies of ‘safe spaces’ utterly ridiculous. Phipps believes that an event hosted by a gender-critical feminist makes university an ‘unsafe’ space. Frankly, she’s missed the boat.

University campuses and student hang-outs are already unsafe spaces and it has nothing to do with transgender politics. They are unsafe spaces because they are full of violent, predatory men (including staff). Female students are at an increased risk of sexual violence because sexual predators choose to hunt on campuses. Suggesting universities are ‘unsafe spaces’ because you don’t agree with an opinion makes an absolute mockery of the violence and micro aggressions women experience every second on a campus.

We need to talk about women’s specific needs for spaces that they define as ‘safe’ for themselves. This includes recognising that there are already men in prisons who have committed sexual assaults and rape in women-only spaces by claiming to be trans. As long as the definition of transwoman is ‘anyone who identifies as trans’, it will be used as a loophole for rapists to access women’s spaces.

There are also transwomen in prison – in the UK, as well as the US and Canada – who are incarcerated for rape and murder of women and girls. Many of these transwomen transitioned after being incarcerated as the case of Synthia China Blast makes clear. There is already evidence that predatory men use ‘safe spaces’ like Alcoholics Anonymous to  target vulnerable women. There is also anecdotal evidence of male perpetrators of domestic violence claiming to be transwomen to access the very refuge in which their wife is living. In the UK, we have a pre-op transwoman convicted of murder who had to be moved out of a woman’s prison because of their behaviour with other female prisoners. The fact that women in the criminal justice system are likely to have histories of childhood sexual abuse and substance abuse and are uniquely vulnerable is ignored. A convicted killer with a penis in a prison full of vulnerable woman – the majority who are there for non-violent crimes – raised no flags for the potential for sexual abuse.

What we need is more investment into support services for everyone living with male violence: more specialist refuges, more rape crisis centres, better NHS provision. We do not need victims of male violence to be shamed out of accessing support because they do not feel safe around people who have a penis. This isn’t about creating a hierarchy of people who deserve support but rather insisting that investment in services reflect the needs of individuals.

We certainly don’t need tweets like this claiming that rape victims who need female-born only spaces “think like rapists”. 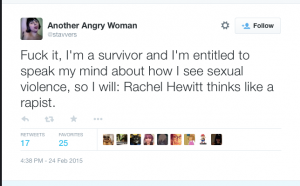 Particularly when the tweeter then points out that they haven’t actually bothered to read the article they are objecting too: 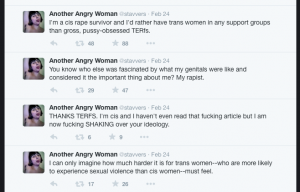 Shaming women for their experiences and insisting that they *must* process their experience the way someone else demands of them is anti-feminist and cruel. No one deserves to be spoken to like H was for disclosing their experience of rape. If your reaction is to tweet abusive language and dismiss the experiences of a rape victim, then you need to reflect on your feminism.

*The tweet has since been deleted and I do not have a screencap of it.