This is Part One of a series responding to the issues around transgenderism and the media representations therein.

When my daughter was 3 she decided she wanted to be a mermaid for the ability to swim underwater. This lasted until she realised that mermaids do two things: swim and brush their hair. Understandably, this was deemed too boring. So, she became a mermaid superhero, which combined awesome swimming skills (and potentially a visit to Atlantis) with the ability to fly and read minds (and ignore her mother). Eventually this became a superhero mermaid rock star since I, in a moment of extreme unreasonableness, refused to let her dye her hair bright blue. (She decided her way around this was to become the lead singer of the Red Hot Chili Peppers as the band could veto my no blue hair rule, but that’s a whole different story).

My daughter no longer wants to be a mermaid or a rock star. She still loves superheroes and we spend a lot of time in comic book stores and at Comic Cons. She also has short hair. Despite clearly being a girl, at a recent Comic Con she was referred to as a boy because she chose to attend as a male superhero. The fact that many of the traditional male superheroes, such as Thor, Captain America, Hawkeye and Green Lantern,  are being replaced by women was deemed irrelevant. Granted 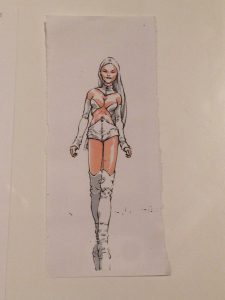 this had a lot to do with the extreme sexualisation of female superheroes and villains, as seen in the comic artist Frank Quitely exhibit at the Kelvingrove Museum in Glasgow. Quitely was involved in the changes to the X-men costumes to make them more ‘practical’, except for Emma Frost who is wearing platform boots and two tiny pieces of cloth covering her breasts.* 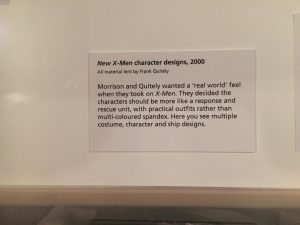 Whilst deeply annoying, the ‘misgendering’ of my daughter did raise some interesting questions on why men assumed a primary school child had to be a boy because her costume featured neither a tutu nor a corset. The teenage boys dressed as female superheroes were classed as ‘transgressive’. My daughter, however, had to be a boy.

I was reminded of this situation when the utterly dreadful Good Housekeeping article on a boy whose Conservative Christian parents decided he must be a transgirl went viral. This child was forcibly transitioned by his parents in response to their relatives suggested he might be gay because he liked to play with toys that were for ‘girls’:

“Shortly after Kai turned 2, friends and family were starting to notice her behavior. Living in Pearland, Texas, that meant we were getting a lot of sidelong glances and questions. Kai would only play with other girls and girls’ toys. She said boys were “gross.” Family members were flat-out asking me if this kid was gay. It made me nervous, and I was constantly worried about what people would think of me, of us and of my parenting. While family was questioning whether Kai was gay ….”

Kai’s parents were so horrified by a son who like to wear bright dress up clothes that they decided he must be a girl.  This poor child has to contend with homophobic parents more concerned about appearances than raising an emotionally healthy child with a wide range of interests.

The correct response to such homophobic comments from family and friends should be to remove them from your child’s life (and deal with your own homophobia). Yet, these parents were feted by Good Housekeeping for transitioning a child to cover up their homophobia. Because having a gay child is the worst possible thing than raising a son who plays with toys traditionally assigned to girls and who may be gay (or, you know, just a kid who likes playing with toys). We are expected to celebrate these parents for their homophobia and for caring more about the neighbours than their own child.

This Good Housekeeping article encompasses all of my fears about the ways in which the construction of the Trans narrative is both deeply conservative and harmful to children.** Rather than recognizing the ways in which gender stereotypes create a hierarchy of male/ femaleand the decades of feminist research into the negative consequences this has for girls, we have, once again, arrived at a point where gender is deemed a binary with children unable to be just children. So, my superhero loving daughter, who only reads comics featuring female superheroes and villains, is being defined as male by so-called leftist people, who cannot conceive of women outside of a hyper-sexualised, violent pornographied object and by right-wing religious fundamentalists who believe women are inferior to men. It is not unsurprising that an Islamic fundamentalist country like Iran forcibly transitions people with the other option being death. The story of Kai demonstrates a similar trend in fundamentalist Christian communities in the US – the isolation and shaming of gay and lesbian children within these communities is well-documented and is responsible for the self-harming and suicides of far too many children.

I cannot see anything liberating about forcing children into categories of boy/girl based solely on whether or not they like trains or tutus – and all the subsequent medical interventions – or the entirety of the bigender/agender/ genderqueer constructions that continue to reify the sex based hierarchy rather than challenging them. Certainly, the recent article in the New York Times entitled “My daughter is not Trans, she’s a tomboy” still supports the theory that ‘girls’, unless they do ‘boy stuff’ are not as good as being born male. Girls who play with Barbies are bad and girls who climb trees are good is an asinine narrative that punishes children for trying to learn who they are within a culture that punishes children who try to conform or challenge the gendered patriarchal constructs of  masculine/ feminine.

Labelling children transgender at the age of 2 is a conservative and reactionary response to the questioning of gender. It is inherently homophobic and it fails to challenge the neoliberal discourse of ‘choice’ which depoliticises liberation politics and renders any discussion of class-based politics as ‘hateful’. As a radical feminist, I want nothing less than the full liberation of all women from the white supremacist, capitalist patriarchy.  This includes recognising that gender is not a performance or an ‘identity’. It is nothing more than the systemic social, cultural and physical oppression of women’s bodies, predicated on women’s reproductive, sexual and caring labour, which does nothing more than a reinforce a hierarchy of man/woman.

*Thank you to Claire Heuchan who pointed out this part of the exhibit to me.

** Part two is a discussion of the medical establishment and the transitioning of children.

Glosswitch, ‘Our culture dehumanises women by reducing them all to breeders and non-breeders‘, (New Statesman, 2014)

.Claire Heuchan, The Problem that has no name because women is too “essentialist”, Sister Outrider, (22.2.2017).

Dr. Rebecca Reilly-Cooper, What I believe about Sex & Gender, More Radical with Age, (2015)