I know this sounds utterly ridiculous. They are slides for children, but somehow they make the list of ‘The Great Parenting Battles’ (breastfeeding vs bottle feeding, working, disposable vs reusable nappies, Tom Hardy vs Chris Evans on CBeebies Bedtime Story*) on Mumsnet. There is the side who think any child who dares to try to climb up a slide is on a short road to juvenile delinquency, an ASBO, and a lifetime of petty crime. And, those who think that slides are meant for imaginative play. Not queuing in a line.

I genuinely had no idea that climbing slides was ‘bad’ behaviour in the UK until I joined Mumsnet. There are always threads by mothers complaining about other people’s children using slides in ways which are deemed ‘rude’. Obviously, there are differences between preschoolers on a slide and school age children. I’m just not convinced that 7 year olds need to queue to climb steps to use a slide. Or, that 10 year olds are incapable of being aware of their surroundings and sharing. 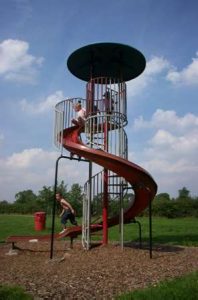 I spent a good chunk of my childhood climbing up slides. There was a helter-skelter slide like this in my elementary school playground. There were also multiple areas with play park equipment that had slides (also, 2 basketball courts, a football field, a rocky hill for climbing in summer and sliding in winter, a nice chunk of rocky Canadian shield for fort building – there are benefits to primaries with 800 plus students and not living in a medieval city). We all climbed the helter-skelter and the slides on the larger play equipment. 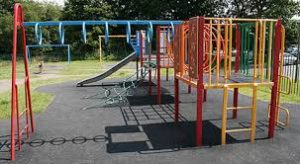 We made them into pirate ships and raided one another for treasure. They became Star Destroyers and secret rebel bases. We even played tag on them.

Neither of my girls were lucky enough to go to schools that had proper park equipment – and never will since Edinburgh council sold off all the old playing fields to housing developers. Our local parks aren’t fit for purpose – and they certainly don’t have equipment for school age children. I just find it mind boggling that a 7 year old wouldn’t be allowed to climb a slide or that multiple children can’t be expected to share a slide with some using the steps and some climbing up the slide.

Climbing slides isn’t dangerous (or anymore dangerous than climbing regular playground equipment) if children learn to share and are aware of those around them. Yes, a 3 year old might kick off about not being able to climb a slide but that doesn’t mean other children shouldn’t be allowed to climb. In my experience, most school aged children would notice and assist the 3 year old going up the stairs and wait until they slid down. If they don’t, a quick word from a parent nearby pointing out the small child would change things.

And, yes, there are some (but a small minority) of children who have 0 boundaries and no understanding of sharing due to poor parenting. In those cases, other children are usually quite capable of telling them where to go. If they aren’t, then a parent steps in. Kids are also perfectly capable of understanding that different parents have different rules and neither is ‘righter’ than the other; just different (see: mobile phones for 10 year olds). And, that different venues have different rules: you can climb a slide in a play park but not at a soft play.

Climbing slides doesn’t make a child an out of control brat. And, its unlikely to end in an episode of Casualty. Kids should be allowed to play imaginatively, pushing boundaries and learning new skills.

Slides aren’t churches. They don’t genuflecting and hard hats to use.

And, there is nothing greater than re-enacting the Battle of Hoth on play equipment in the middle of winter.

*Not currently a battle but a prophecy for May 10.