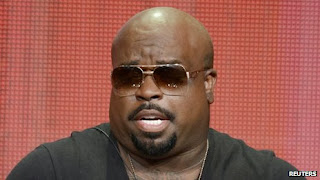 CeeLo Green has been charged with giving the drug ecstasy to woman without her consent in Los Angeles last July. He then took her back to her hotel room.
I wrote gave her “the drug ecstasy without her consent”. The BBC wrote “slipped”. Let’s be clear here: the word slipped implies an accident. Deliberately putting a known rape-drug into a woman’s drink without her consent is not an “accident”. It’s a deliberate act of violence in and of itself.* It is also a deliberate act made in order to commit a second act of violence: rape.
This is the entire article on the BBC website:

Singer and television star CeeLo Green has been charged with giving the drug ecstasy to a woman while the two were dining at a Los Angeles restaurant.

The two then went back to the woman’s hotel room, authorities said.

If convicted, Mr Green, 38, faces up to four years in prison. He pleaded not guilty.
Mr Green was charged with one felony count of furnishing a controlled substance, the Los Angeles County District Attorney’s Office said.

He pleaded not guilty during his arraignment in Los Angeles County court on Monday.
Prosecutors have requested his bail be set at $30,000 (£18,579). He is scheduled to appear in court again on 20 November.

Mr Green, an Atlanta native who rose to prominence as a member of rap group Goodie Mob, later won fame as a solo artist. He also appears on the NBC reality show The Voice.

What isn’t mentioned: what Green did to the victim after they got back to her hotel room. The victim doesn’t remember because she was drugged to the point of amnesia. It neglects to mention that the prosecutors “declined” to pursue a rape charge because the woman was incapacitated. Even the Daily Mail managed to include that extremely important piece of information, although it was buried in a huge pile of rape myths. There is also no mention of Green’s well-documented history of violence against women. Green has convictions for domestic violence against his ex-wife who divorced him citing mental and physical cruelty. There is at least one other instance of sexual violence which was investigated.

The Daily Mail article is full of the usual rape myths, many of which came from the police investigating the crime itself. The LAPD has a reputation for being a heteronormative, racist, homophobic, militarised and corrupt institution. It’s not surprising that rape victims don’t report when the police believe that male celebrities have the right to rape whoever they want without punishment.
This is just a brief snapshot of some of the myths in the DM which came from police sources:
These are two pernicious rape myths which are responsible for the fact that most rapists never face a criminal trial never mind conviction. The vast majority of rapes are perpetrated by men known to the victim; men who know that their “prior relationship” will be used as evidence that the woman must have consented. It is the reason that rape in marriage is still legal in numerous countries all over the world. Rape in marriage was only criminalised in 1991 in England and Wales [1982 in Scotland].
What the BBC neglected to mention is that Green’s own attorney admits that “sexual contact” took place. Blair Berk just claims it was “consensual”. This is yet another pernicious rape myth: if the woman was so incapacitated by ecstasy that she could not remember what happened, then she could not have consented.

CeeLo was pleased that the rape charge was rejected and will address the ecstasy charge in court, his attorney Blair Berk wrote in a statement.

She said any sexual contact between Green and the woman was consensual.

‘Mr. Green encouraged a full and complete investigation of those claims and he was confident once conducted he would be cleared of having any wrongful intent,’ Berk wrote. She declined further comment.

The above was published in the Daily Mail. It reads as though Green’s attorney is admitting that rape took place but without “wrongful intent”. At what point did deliberately putting a rape-drug into a woman’s drink stop having “wrongful intent”?

This is rape culture: where a male celebrity cannot be prosecuted for rape for drugging his victim in advance. Where deliberately placing a known rape-drug in a woman’s drink has no “wrongful intent”. Where a woman is in a perpetual state of consent to any man she meets, and no woman can ever revoke consent. Once you have said yes to a man, you can never say no again.

Below are a series of tweets on the case:

Thank you to Victoria Brownworth for bringing this to my attention.