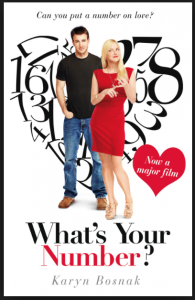 What’s your number is a typical asinine rom-com starring Anna Faris as Ally Darling and Chris Evans as Colin Shea. The simple premise is Darling discovering that the number of sexual partners she has had (19) makes her a slut – as evidenced in a “women’s magazine” she read after being fired from her job. So, with the help of deeply slimy neighbour Shea, Darling tracks down all her ex-boyfriends to see which one should be her partner for life. Because there is a magic number of men that having sex with  would make her even more of a slut than she actually is. Shea is an unemployed musician who has sex with a different woman every night and spends his mornings hiding in Darling’s apartment so the (many) woman will leave his apartment without anything creepy like having a conversation. Strangely, at no point do we ever hear Shea’s sexual history being as being slutty.

And, yes, by know you are all wondering why I continued watching the film. As did I.

But, somewhere in this film about a woman freaking out over other women calling her a slut, believing she is a slut, an unpleasant mother whining about her daughter not having enough ‘class’, and the useless father, there is seen involving consent discussed appropriately. Obviously, and this needs no spoiler warning, Shea falls in love with Darling (and eventually she with him once she gets over silly things like being able to pay the rent) and they end up almost having sex. Despite being an utter shite in his treatment of women as sex objects, when Darling says no Shea accepts it. There is some silliness about how much of a penis in a vagina constitutes sex but that is a clearly a joke.

There is no coercion. No attempts to convince Darling. She says no. He stops.

The director chooses to ruin this demonstration of consent but having some  dude from 20 years rock up to tell Darling they never had sex so actually she’s not really a mega slut having gone over 20 partners (and no recognition that sex she cannot remember will have made her too drunk to consent).

The film is pretty much the essence of shaming women for having sex with multiple partners. Yet the only actual sex scene in the film involves a discussion of consent that is real and clear. It is a weird juxtaposition.The film is utterly tedious and probably shouldn’t ever be watched ever again. By anyone.