They say shit like this on twitter and think it makes them a feminist and a gender egalitarian.

Granted, it’s possible he’s being ironic in his twitter bio:

But, we all know he isn’t. And, this is why men can’t be feminists.  Hell, it’s why most men who identify as feminist are suspect.

Suggesting that women who wear a religious item of clothing are “spineless” is misogyny. It is a total failure to understand structural oppression, choice, faith, and survival. It is equally racist.

Women aren’t property but we also aren’t spineless or stupid – as this man implies. Women make choices within a very limited range to survive. Many women have no choice not to wear the hijab because of threats of violence within the home or the community. Others choose to wear a hijab for a million reasons that this man is clearly too dim to even begin to contemplate.

Telling a woman to wear/not wear an item of clothing is just a bullshit erasure of male supremacy and structural oppression. It holds women accountable for men’s behaviour.

The Dude who came up with #NoHijabDay is equally as misogynistic and racist, but at least he’s not pretending to be a feminist. Not that that is any comfort whatsoever in the grand scheme of things. 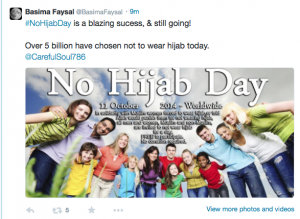 One thought on “Why Men Can’t Be Feminists Redux”