I was fortunate enough to get tickets to see Zadie Smith at the Edinburgh Book Festival this year, which is why I know the “Zadie Smith banned her daughter from wearing make-up” is utter bollocks. Quite how the person who spread this rumour managed to understand Smith’s comment as a ban is mind-boggling. I’m veering between two options: a) they are on the wrong side of dim; b) deliberately propagated this for click bait. 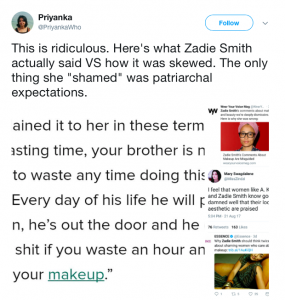 It is incredibly disappointing to see media who claim to be feminist calling out Smith without investigating the context in which Smith referred to make-up. She did not “ban’ her daughter from wearing make-up.  The statement below was in response to a question from the about raising children within the harmful culture of patriarchal standards that hold girls to unrealistic expectations of beauty. Smith used the issue of time as a way to explain to her daughter, in age appropriate language, how patriarchal standards negatively impact girls’ lives. 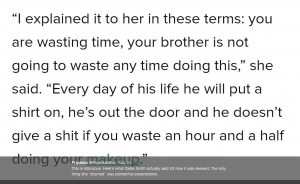 This article from Feministing very good on ‘choice’ feminism and patriarchy:

… Makeup cannot be beyond the realm of criticism just because we enjoy it and it makes us feel good. There are social contexts and structures which contribute to why we enjoy it and why it makes us feel good. Our existence in a misogynistic society operates in complex ways: we can subvert and reappropriate the tools of our oppression, but we cannot completely erase the patriarchal conditions of our existence through our own choices and enjoyment.

To lambaste Zadie Smith for expressing worry that her daughter could be forced to care about things that her son won’t be compelled to care about — things that could affect her self-worth, her spending, and her assessment of herself — is to fall into an uncritical and complicit liberal feminism. We can, and must, pass on a feminism that more rigorously interrogates systems (and does not see this critique as an attack on individuals) to the next generation of young people who will need it to navigate a sexist world. …

What seriously pisses me off about the attacks on Smith are that all of this media coverage has erased the real problem: white privilege.

The chair of the sessions was critic Stuart Kelly, who I had not heard of before this. I had a raised eyebrow early in the session due to some of Kelly’s questions, which were on the wrong side of pompous. This is without the multiple references to his involvement with the Man Booker prize. I left the session under the impression that Kelly had been both a judge and the organising committee for a number of years. Wikipedia, the font of all knowledge, says no.

Kelly lost all credibility when he stated that the focus on choosing ‘quality’ books for major literary awards will, eventually, lead to ‘equality’; that focusing on gender, race, or class is not necessary. Quite how long he expected this transformation to take considering millennia of oppression experienced by those not privileged enough to have been born white, rich and male.

I’m also pretty certain he’s been practising that statement in front of the bathroom mirror because he looked incredibly pleased with himself for sneaking it in. Because he was a judge at the Man Booker prize one year. After a deer in the headlights moment when he realised no one was going to give him cookies for being awesome, Kelly opened the session up to questions from the audience; a number of which were more white people’s feelings than recognising Smith’s discussions of race, class and gender.

Granted, a number of questions from the audience weren’t exactly quintessential examples of intersectionality at play, but the focus on Smith’s words around make-up and raising girls in a culture which considers beauty more important than intelligence is sexism. I would love to see feminist press targeting Kelly’s refusal to understand how multiple oppressions prevent people from accessing publishers; never mind how books are chosen for literary awards. Instead, they’ve gone for shaming Smith for trying to raise a daughter who recognises the structural oppressions within a white supremacist capitalist patriarchy.